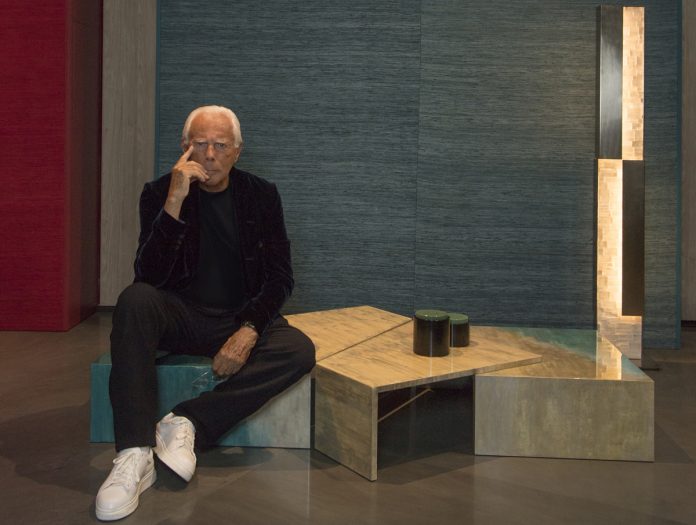 Giorgio’s kingdom is a place of creativity and enterprise, free from constraints and borders (particularly those of a geographical nature). The Armani brand is constantly evolving and expressing itself through different sectors, whether fashion, interiors, design or hospitality. By staying true to his core values of pure lines, sobriety and simplicity, Giorgio Armani has become an icon of elegance. And it is elegance that springs to mind when you think of the Armani/Casa brand too, with its contemporaneity, lightness and declared goal of “giving life to architecture” via Armani’s “aesthetic sensitivity”…

The precursor to the Armani/Casa collection was the Logo Lamp from 1982. How did that idea come about?
Back in 1982, the Logo Lamp was our first step into the world of furniture, a sector that has always fascinated me but into which I only really made my move some years later. I’m really attached to the piece – it’s now the logo of Armani/Casa. With its pure geometric form and natural colours and materials, it’s symbolic of all the core elements in my design philosophy.

How important is lighting to you?
Lighting is vital because light plays a “guiding” role in all domestic spaces. It should caress the outlines of objects and furniture and it must be relaxing for the eyes and mind. Generally speaking, I prefer dimmer lighting – it should never be too direct. For this reason, we have a wide range of lamps in the collection, including some models made from precious Murano glass. They’re unique objects, made with care and passion according to artisanal methods which have been handed down from generation to generation.

You’ve said that architecture, film, photography and art are big sources of inspiration for you. How do these areas come through in interior design?
I’ve always drawn inspiration from travel, art, architecture and photography, but also from simply observing my surroundings. During the creative process, I rework the various elements and influences to fit my personal taste. Over the years, I’ve developed an aesthetic style based on a concept of discreet, timeless elegance, and that’s the idea that guides all of my projects, including those in the field of design.

How much does fashion influence your interior design pieces and in what ways?
There’s a really strong bond between fashion and design. For the home, my core idea draws on an appreciation for pure forms, craftsmanship, sobriety and understated luxury. Naturalness is the thread that connects everything I do, albeit scattered with subtle, exotic hits and flashes of eccentricity. At times, you can pick up on direct links to fashion, such as the use of a specific colour to emphasise the details, or the repetition of a pattern or design. That said, more often than not the connections between my clothing lines and my furniture collections are less overt – it’s more about a shared sense of aesthetics.

In one interview you said that your obsession is your homes. Why is that? What are they like?
For me, the home brings a feeling of warmth and tranquillity. It’s a haven for the body and the mind, a place where you can find a silent space for relaxation. Having said that, all of my homes, not just my house in Milan, are constantly changing. I like to fill them with objects, the majority of which I buy while travelling, and I often change the layout of the furniture and make other tweaks. For example, at my house in Antigua, I recently extended the veranda and created a covered area on the beach which is perfect for spending time with friends.

We’ve seen Armani’s lifestyle and design concepts flourish in the hospitality industry. What’s the concept behind the Armani Hotels? Can we expect any more to open?
Once upon a time, people spent long periods at hotels because the services offered and the atmosphere around the place made them feel at home. For me, that’s the fundamental requirement for a hotel – to embody a concept of hospitality based around comfort, aesthetics and constant, discreet service which makes guests feel at home even when they’re a long way from that. A bit like if they were staying in a big private apartment. In terms of new openings, we’re always working and have a lot of projects on the go.

You recently opened a new flagship store in London. How has the customer experience changed and how has that been reflected in the store itself?
Years ago, the architecture of a store was designed to convey the values of the brand in a long-lasting, solid and perhaps static way. Nowadays, our purchasing habits have profoundly changed and it’s only natural that stores themselves change too, in addition to the products they offer. I started to push for these changes way back in 2000, with the opening of Armani/Manzoni 31. Since then, I’ve analysed lots of different concepts, which differ according to the brand or location. Diversification is essential. In the future, I envisage more fluid, modular solutions that can easily be reworked, with natural materials still at the heart of everything. In the case of our two interconnected boutiques on London’s Sloane Street, I wanted to send out a common message bringing together Giorgio Armani fashion and Armani/Casa furniture. I created spaces in which the Armani style is presented as an all-compassing lifestyle, precious and elegant. There’s a free, natural feel to the way you move from one product category to the next.

The Armani brand was the first to penetrate the Chinese market, using an exemplary marketing strategy. How is Armani/Casa performing in China? What are the challenges and growth prospects in the country?
China continues to be a very important market. I can now say that its performance in recent years confirms predictions I made a lot time ago in 1998, when I opened the first Giorgio Armani store in Beijing, well before the economic boom. Nowadays, the Asian market is vast and complex, but it’s very receptive to the various strands of the Armani brand, including our furniture collections, where we’re seeing constant signs of growth.

Chengdu is home to the two towers of the Armani Art Residence, while the Capital Residence in Beijing is just another of the group’s many real-estate projects. How do these fit into the urban makeup of the cities?
I think that through these important projects I’ve been able to bring my aesthetic concept to China while respecting the identity of the city. In cities that are already very much focused on the future, I think I’ve made my personal contribution. In Beijing, I worked with natural materials and forms in what’s considering the largest “green” building complex in China, while in Chengdu it was really exciting to collaborate on the construction of such an imposing and modern multi-functional complex. In the future I’m going to be concentrating on projects through the Armani/Casa Interior Design Studio, creating new furniture for luxury residences around the world.

More and more fashion brands are moving into the world of interior design, but you are unique in that you have remained in control of creative direction across all sectors, including the Interior Design Studio. How would you describe the core concept behind every creation?
The core philosophy is the same. I’ve always given great importance to the places in which we live – they are an extension of the way we are and the way we feel. For me, offering my take on what a home should be like and how a home should be lived in was the natural next step. At the same time, it seemed perfectly natural for me to stay in creative control in this field too. Through the interior design consultancy service, I’ve taken a step closer to my public, allowing us to create a space together in true Armani style while incorporating their tastes and personality.

Maistri and the philosophy of timelessness