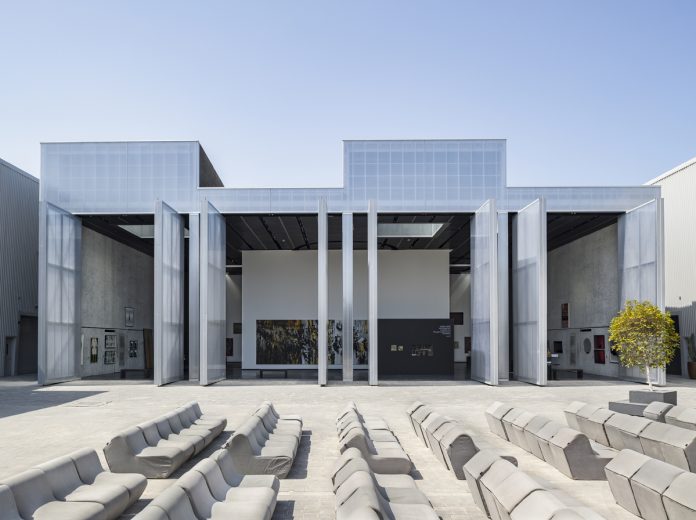 In recent years, Alserkal Avenue has gained a reputation across the art world as the main hub for creatives of various disciplines in Dubai and, more generally, in the Middle East as a whole. The Avenue began to take shape in 2007, in the industrial area of Al Quoz, not far from Downtown Dubai. A architectural and urban regeneration project was launched involving a series of warehouses owned by the Alserkal family, who had previously run a marble factory there.

Now, after ten years and countless extensions, the district – which encompasses around 50,000 square metres in total – boasts 90 warehouses and has attracted over 60 businesses, split between five “lanes” and The Yard, which serves as the main square. The complex is home to art and design galleries featuring both local and international work, in addition to design studios, multi-functional spaces used for events, exhibitions and performances, a cinema with a focus on art, concept stores, a theatre, a photography centre, the Jean-Paul Najar Foundation for Contemporary Art, the Salsali Private Museum, co-working spaces, a fitness centre, restaurants and cafes.

Occupying a middle ground between culture, training, business, visual arts, design and architecture, Alserkal Avenue is not just a place for industry professionals and a growing public, but also an important organisation fuelling the creative economy across the region. That is something backed strongly by founder Abdelmonem Bin Eisa Alserkal and now led by Vilma Jurkuta, who – in 2015 – launched the Alserkal Programming platform to oversee the organisation of exhibitions and performances, the commissioning of works of art and the planning of artists’ residences, meetings and workshops.

A constantly evolving melting pot of services and creative pursuits, the Alserkal Avenue project was undoubtedly facilitated by the vast industrial buildings in which it was set up – and the organisers continue to insist on maximum variety and flexibility when it comes to spaces and structures. It was within this context that Concrete – the latest architectural addition to the complex and the Office for Metropolitan Architecture’s first project in the UAE – was inaugurated in March 2017. “We wanted to keep the interior as neutral and flexible as possible, while transforming the existing exterior so that it would stand out from the surrounding buildings,” explains Iyad Alsaka, partner in charge at OMA.

For example, the main façade – which looks out onto The Yard – was clad with panels in translucent polycarbonate and finished with full-height doors. Reminiscent of curtains, the doors can fully opened out onto the square, allowing the natural light to penetrate. The system ensures maximum fluidity between indoors and out, turning the square into a public space to be enjoyed to the full. The rest of the facades have an unusual, sprayed-on finish – a mix of concrete and pieces of glass and mirror, where the rough finish of the cement is scattered with sparkly reflections. In order to maximise the space for events, the inside has been kept as a “blank slate”, with service areas on just one of the sides of the space and an open-plan layout, the walls and flooring left completely blank. Four huge sliding walls also ensure that the space can be rearranged for different purposes.

From Renzo Piano to Zaha Hadid: how the architecture is changing...

Lombardini22 plays in Serie A