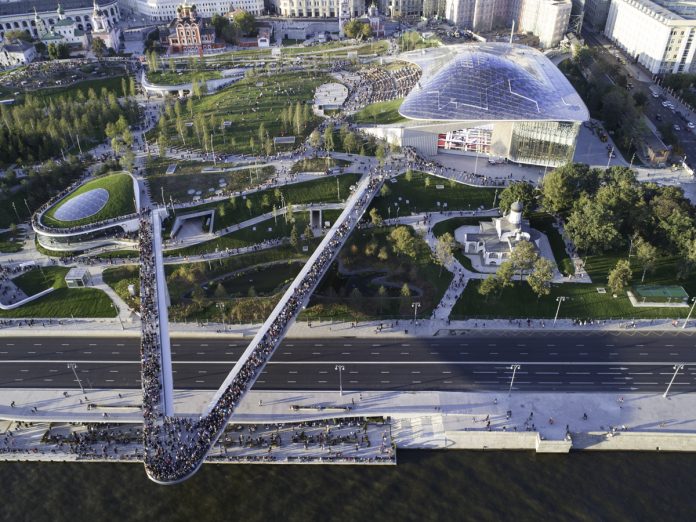 Better quality of life. A facelift. An unprecedented wave of internationalisation. Moscow is a very different place to the one we discovered ten years ago (when IFDM visited for the first time). There is a feeling of freshness and innovation, matched by a redeveloped urban panorama mapped out by some of the world’s leading architects and designers, including Snøhetta, Diller Scofidio + Renfro, Okra and more.

The credit has to go to the “Moja Ulitsa” [“My way”] project, which was launched in 2014 and began to bear fruit during the 2018 World Cup in June. The project – which is due to be completed by 2020 – includes the creation of 50 new parks, improvement works to 50 kilometres of roads and squares, 12 new riverside walks and the restoration of many of the city’s historic buildings. It’s an initiative that naturally opens Moscow up to outside influences and innovation and will surely see it compete with the world’s great cities.
This urban revolution runs alongside a more general evolution in Moscow society that has been underway for some time. People are more open to styles and influences from around the world, with this resulting in a more contemporary approach to design in the city.

A growing consequence of this (albeit not an entirely new one) is the raft of interior design solutions on offer in both the residential and hospitality sectors, starting with the Salone del Mobile.Milano Moscow. Now featuring a striking new rebrand, the city’s foremost furniture event will see simpler designs, but not at the cost of elegance and eclecticism. With many of the products on show hailing from Italian companies, the aim is without down to satisfy the current demands of an increasingly sophisticated market with its finger on the pulse of global trends.

The Salone del Mobile.Milano Moscow – renamed for this year – is now in its 14th edition and will run from 10 to 13 October at Crocus Expo-2. Over 250 companies will participate in the event, seeing it as a golden opportunity to establish themselves on both the Russian and global market. There’s set to be a huge variety of products on show, from classic furniture to luxury models via design pieces.
Last year, Italy confirmed its position as the second-largest exporter of furniture to Russia – so it is vital that the country is well-represented at the event. Over 30,000 visitors are expected at the Salone, including industry operators, sector experts, media and the general public.

The ‘fluid’ spaces of ADL