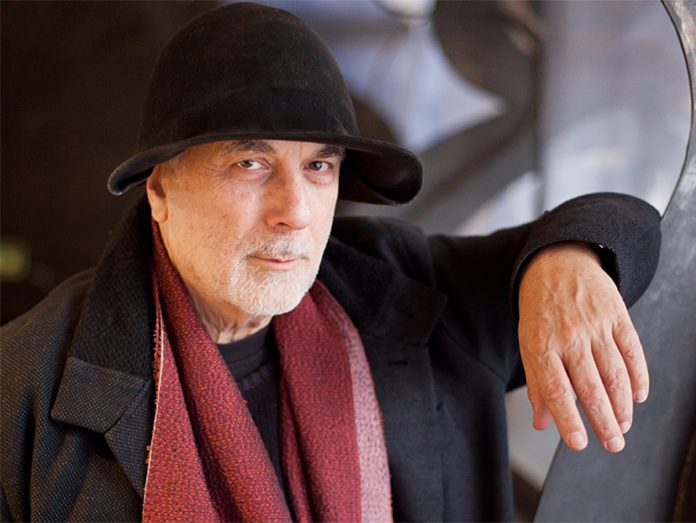 Born and raised in Israel, you moved to London which has since become your city. What has remained of your ‘Israelness’?

Everything! We are all prisoners of the culture which once surrounded us! The language, time which travels at different speeds from city to city. I was born in the Mediterranean during an extremely interesting and optimistic historical period, a much better time than today.
I came to London as a tourist, I wasn’t intent on leaving Israel: it was just a journey, it wasn’t as though I had decided that it would become my city beforehand. I felt like an outsider in London, but at the same time I discovered a new dimension: I was freer because I hadn’t got used to the new place I had come to live in yet. I settled in the suburbs. Together with my friends we were inquisitive, thirsty for knowledge, we read about everything that was happening in New York, we were passionate about all forms of art and we knew all about its protagonists.

Do you feel more motivated when you receive a briefing from a company, or when you are free to think, free of all constraints.

I feel motivated in both situations. It happens that I have ideas and I ask myself “what company could build them?”, but then I might meet a customer and ideas spring to my mind as we are speaking. The most complicated thing for me is to let ideas travel freely, go wherever they want. This is what happened, for example, when the Dupont managers proudly presented Corian to me. They challenged me to actually spot the joints between slabs. I really wanted to show the stitching and even went so far as to use white glue in the case of black slabs. This was my personal method for freely interpreting a product, perhaps with a pinch of provocativeness. I was aware that they had worked extremely hard to render the overlapping of slabs without a solution of continuity, however my head was pulling me in exactly the opposite direction.

What path was there with Venini?

In the beginning it was rather complicated and difficult, I wasn’t sure whether a beautiful solution would come. Then things changed last year: Venini changed hands, I had been concentrated on works with glass for some time now, simultaneously I was designing glasses. The new owners insisted and in the end they got the better of me: I am very satisfied with the vase collection Where are my glasses, a mix between two materials which are very interesting to me: glass and glasses.

People expect bold curved lines or something shiny and the use of steel from Ron Arad: is this the quintessence of yourself as a designer?

If you look around and look at my works you can see lots of straight and lots of curved lines, some objects are rusty, other shiny and reflective. I like all materials and all colours, it depends what I use them for. I love artisanship, manual skill and industrial processes with the same intense inquisitiveness. I consider technology to be a key instrument which we shouldn’t ever be slaves to.

Once modellers were cited, then came the designers. A unique and irreplaceable genius like Giovanni Sacchi (the Milanese modeller and – one of his numerous works– creator of the famous Olivetti Lettera 22; he received the Compasso d’Oro for his career in 1998) enabled us to touch objects designed by someone else with our very own hands, a harbringer of today’s 3D simulation processes. So I try to combine both realities, to unite the world of ideas with the world of things.

Do you feel more designer or interior designer?

I’m not an interior designer, although I have designed a museum and a hotel, but I don’t see them as a product of interior design. It is true that unlike a hotel room, you don’t actually sleep in a vase, but my design approach remains the same in both cases. If there is a good vibe with the customer and partners, then everything runs smoothly and effortlessly. This is one of the reasons for which I don’t feel as though I rigidly belong to a single professional category. I have been extremely lucky because I do things which rouse my curiosity, while also coming across people who are interested in what I do: if this alchemy ever runs dry, I’ll probably have to change my job.
A conversation with Ron Arad is a slalom fraught with thousands of curves, many of which are sudden and unexpected. However, in the end he is right: each curve is always joined to another curve by a straight line. Straight as his own thoughts.

Luti returns to the top management of Salone