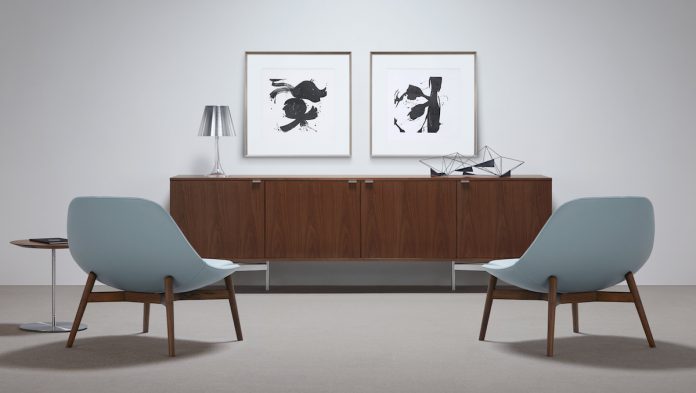 Launched as a new line of furniture under the century-old Bernhardt Furniture Company, the Bernhardt Design brand was founded in 1980 to promote product innovation in the contemporary world. John Mathias Bernhardt was a pioneer of modernity, who, in 1889, made the far-sighted decision to create, from out of nowhere, the first industrial company in the rural Lenoir area in North Carolina. Here, he helped the region to prosper by enhancing its natural resources and strengthening its economy through the art of woodworking. But this was not enough for him. He also wanted to explore artisan techniques, refining them beyond their limits and transforming the company into a diversified, leading manufacturer. The company still maintains these incredibly high standards. Its president, Jerry Helling, has guided its development, building an extraordinary creative team in the last 15 years and overseeing a series of successes related to product results, prestigious collaborations with international designers and to the company’s cultural and social role. This has led to an interdisciplinary relationship with the Art Center College of Design in Pasadena, challenging students to create outstanding products for mass production. It has also led to sponsorship of a scholarship (ICFF Studio) for emerging talents and an annual award (American Design Honors) for notable American designers, to support of a cooperative (The Carrot Concept) that promotes design in El Salvador and to a program (America Made Me) that supports young people and national brands abroad. Another series of constructive initiatives, accompanied by a product range that is no less impressive. This was confirmed at the recent edition of ICFF in NY, the show that reveals the latest trends, at which Bernhardt Design exhibited its latest collections. Such as the new series of fabrics created by Taher Asad-Bakhtiari, half-artist, half-designer, who, in the 6 different Textiles Collection patterns expressed in 52 colors, has incorporated all of his Iranian heritage mixed with a modern vision.

Salvadoran duo Harry and Claudia Washington have demonstrated equal foresight. Taking inspiration from domesticity in perpetual motion as well as from their little four-year-old son, they have invented a nomadic upholstered armchair: Diego can be easily moved with two fingers thanks to a reinforced flap.

The Queue chairs mark the American debut of Danish designer Claus Breinholt, combining traditional aesthetics and a plastic injection molding technique. The jewel in the crown of the new pieces is the CP.4 Credenza Collection, a legacy left by legendary designer Charles Pollock before his death in 2013.

Antolini, from Cologne to Paris

USM: the infinite era of steel