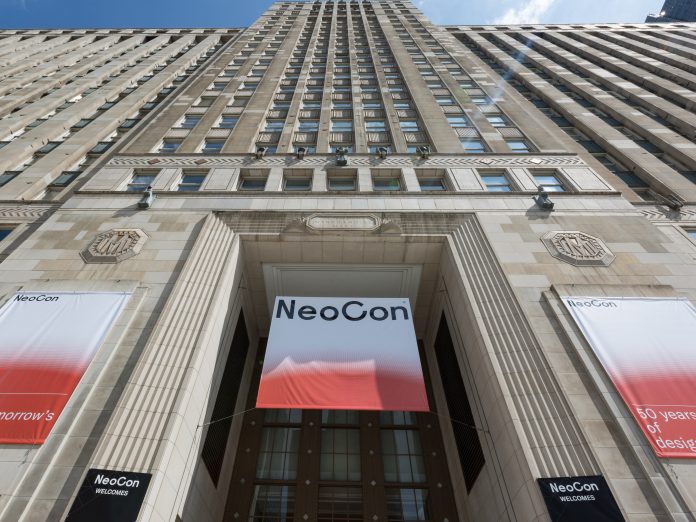 An atmosphere charged with energy was the essential feature of the recently concluded NeoCon Chicago. “Energy” is the key word that emerges from the statements of the players who took part, from June 11–13 at the monumental The Mart.
“Every year we’ve exhibited, we’ve continued to see more traffic and more excitement surrounding the show. That energy was palpable and evident across ALL the floors this year, including the seventh,” said Michael Dardashti, Executive Vice President of Snowsound North America; “We could tell from the energetic crowds at The Mart that the excitement of NeoCon was at an all-time high this year!” adds John Hopkins, Principal and Design Director, IA – Interiors Architects (Chicago office), which continues which continues to speak about the quality of the exhibition proposition: “We loved that there was such a focus on acoustic solutions–it’s an undervalued component when it comes to privacy, workplaces, and open environments.”

The wide and enhanced product range for the workplace and contract sector is the distinctive feature of NeoCon, from which it is possible to trace the guidelines of the entire sector. Sustainability, materials, integrated technology and acoustic performance were among the top trends emerging from the show, which gave a glimpse of a more attentive approach to comfort in workplace design, where individuals and their well-being are increasingly acquiring importance.

But the news brought by NeoCon 50 went beyond the design sphere, reaching the business dimension and culminating in the cultural and educational one. Announced concurrently to NeoCon the acquisition by Herman Miller of the Danish contemporary furniture brand Hay, and the partnership between Steelcase and West Elm, furthermore ten new permanent showrooms were inaugurated at The Mart during the fair, joining the new hundred exhibitors on the seventh floor.

Exceptional guests studded the calendar of the Conference: Art Gensler, Cheryl Durst, Nick Thompson, Cindy Allen, Robin Klehr Avia, Gisue Hariri, Lauren Rottet and Carol Ross Barney.
Finally, on the occasion of this 50th edition, the new NeoConversation podcast was launched, a voice of the design industry dedicated to new trends, design solutions and interesting themes, in anticipation of the next edition of NeoCon, which will take place from June 10-12, 2019.

ICFF: the word to the Director

Festival of Shanghai at Neri&Hu’s house

Turri focus on ‘the sex appeal’ of Eclipse