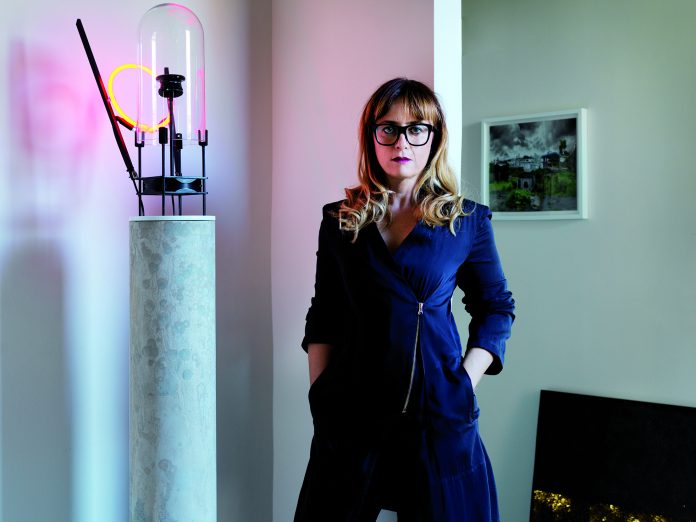 What’s the concept behind the new collection?

The concept behind the Respiro collection is the natural evolution of the process of brand re-evolution we started three years ago. It’s seen us broaden our style horizons towards a more contemporary approach.
Respiro is about observing what usually goes unobserved – breathing is the beginning of everything, it’s what allows us to live. It’s about putting men and women at the centre of it all. We believe that the relationship between human beings and objects, and the nature of the intimacy and bond that’s created between the objects and the people that use them, are absolutely vital. We want to move beyond mere functionality and attempt to attach a symbolic value to each and every object.

Respiro is also about the rhythm and dynamism that exists between one object and another, between the object and the user and between the object and the space around it. For this reason, we’ve spent a lot of time focusing on materials, combining highly contemporary varieties with warmer, more decorative options. We’ve also used transparency and drawn inspiration from different architectural styles. It was really interesting to delve deeper into what makes the materials tick – to discover their rhythm, their reciprocity, the hidden dialogue. Our job was to figure out how much space and importance to give each of them. At the heart of Respiro is the idea of striking the right balance in a space to ensure it can convey a sense of wellbeing and relaxation. We wanted to achieve that in all areas of the home.

Last year, wellbeing was all about bringing greenery into the home. Is nature a big factor this year too?

This year we’ve decided not to go for a hyper-realistic approach to nature, but to be more symbolic about it. For example, at our exhibition space at the Milan Furniture Fair, we used huge bamboos to create enormous, symbolic forests – turning them into architectural, structural elements. In the Far East, the value of bamboo goes far beyond its practicality: it conveys strength, vitality, flexibility, rhythm. Going back to the concept behind Respiro, the inspiration came to me when I was re-watching the film “The House of the Flying Daggers” by Zhang Yimou – it’s about a forest in which all of man’s passions come to life. That idea of immersing yourself in feelings and emotions was the concept we wanted to get across through architecture, so bamboo was the perfect way of doing this.

Is this the future for luxury?

When it comes to the style and meaning of luxury, Visionnaire is looking to go beyond the material value of things. We’ve thought long and hard about the meaning of the term luxury. It encapsulates some very precious values for our company and for the entire industry in Italy – attention to detail, sartorial expertise, unique products. However, any brand that sees itself as a trendsetter is compelled to be able to sum up and convey the intangible value of those products. That means going beyond purely aesthetic beauty (in terms of both style and material) to tap into everything that goes into how a product is made. That’s why Respiro really is the next step in the “greenery” concept we were focusing on last year – it heralds the end of our reflections on and analysis of what the concept of luxury means today.

How has that been translated into products?

It’s been a nice challenge. We wanted to strike a balance that gave our clients a clear idea of those tangible and intangible values and that had a more accessible style and ethos, because the principle behind Respiro – breathing – is one that belongs to us all. Therefore we wanted a style to which many different people could relate– including people who aren’t traditionally associated with our brands.
That has been translated into a bold style and a minimalist approach to materials. We didn’t want to go for the over-the-top luxury look, but keep things more minimalist. Now that doesn’t mean adopting fully fledged minimalism, but being able to understand the idea of balance and take away the superfluous to get our point across, tell our story.

Part of this balanced approach to materials involved thinking carefully about combinations. Rather than mix and match lots of different materials, we decide to use the same material in lots of different ways. Take the Kerwan table, designed by Alessandro La Spada. It might look like just a big block of marble, but there’s more to it than that – on an aesthetic level, we’ve used stunning invisible grey marble, while employing technology to allow us to fold the marble and combine it with a concave metal structure. The end result is pure rhythm – pure respiro. And that’s what we’ve looked to achieve in every single product.

Did you work with anyone new to develop Respiro?

We brought in two new influences in the form of Marco Piva and Roberto Lazzeroni to supplement our trusted group of Alessandro La Spada, Mauro Lipparini, Steve Leung and others. We asked Piva – who is used to working on a large scale – to recreate that sense of rhythm on a smaller scale. The result was an object that’s more like a city: Marty is a low table composed of several vertical elements reminiscent of residential buildings, sculptural palazzos and skyscrapers that help to hold up the transparent smoked glass table top. Lazzeroni, meanwhile, created the Reverie bed, the aim of which was to produce a piece that wasn’t used aimed at homes, but could have a broader scope of application in contract settings.

Speaking of the contract sector, what does the sector mean to you?

For us, the contract sector is just as important as the residential and bespoke sides of our business. We create stunning, high-impact spaces with meticulous attention to detail. Visionnaire has been operating in the office and hospitality industries for years, mainly with boutique hotels and company headquarters. It’s vital that you maintain that dreamlike quality when it comes to design – that’s what makes something unique, desirable, an objective. Nowadays, hotels have ceased to be purely functional spaces where we sleep – they have to deliver an experience. It’s the same thing in residential spaces: there are thousands of beautiful products, but the challenge is to create a coherent world around them. It’s about creating poetry. That’s what we do with our designs – we work on a more intimate, private level. We aim for absolute wellbeing.
Working to this approach, we delivered a fantastic project in Los Angeles named Hannover. It’s a villa in the rationalist style looking out over the city – we were responsible for furnishing the entire space, right down to the tiniest detail.

Luceplan presents the technological charm of Amisol in Oslo