The project, which occupies the ground floor and basement of an iconic, early 20th century building on Wall Street, consolidates David Rockwell’s collaboration with chef Nobu Matsuhisa, which began with a small bar in the Tribeca district around twenty years ago. In Downtown, the new Nobu restaurant is reinventing itself thanks to the contributions of New York designer John Houshmand, ceramic artist Pascale Girardin and textile designer Isabella Amstrup. Nobu is embracing a wide range of different design approaches, with which its non-traditional, inventive cuisine shares the same emphasis on exploration, in terms of forms, colours and textures. Everything is harmonized in the casual alchemy of difference. In food, through an intercultural and contemporary gastronomic blend; in design, by incorporating in the pre-existing neoclassical setting a varied array of influences that range from Japan to South America. The ground floor, which is covered with Botticino marble and dotted with monumental Doric columns, contains a bar, a lounge area and a sushi bar. The golden glow diffused from the central counter of the backlit onyx bar is interrupted along its circumference by four marble columns that lead to four more intimate lounges. An informal dining area features chairs and tables alongside a wavy wooden screen that rises upwards. 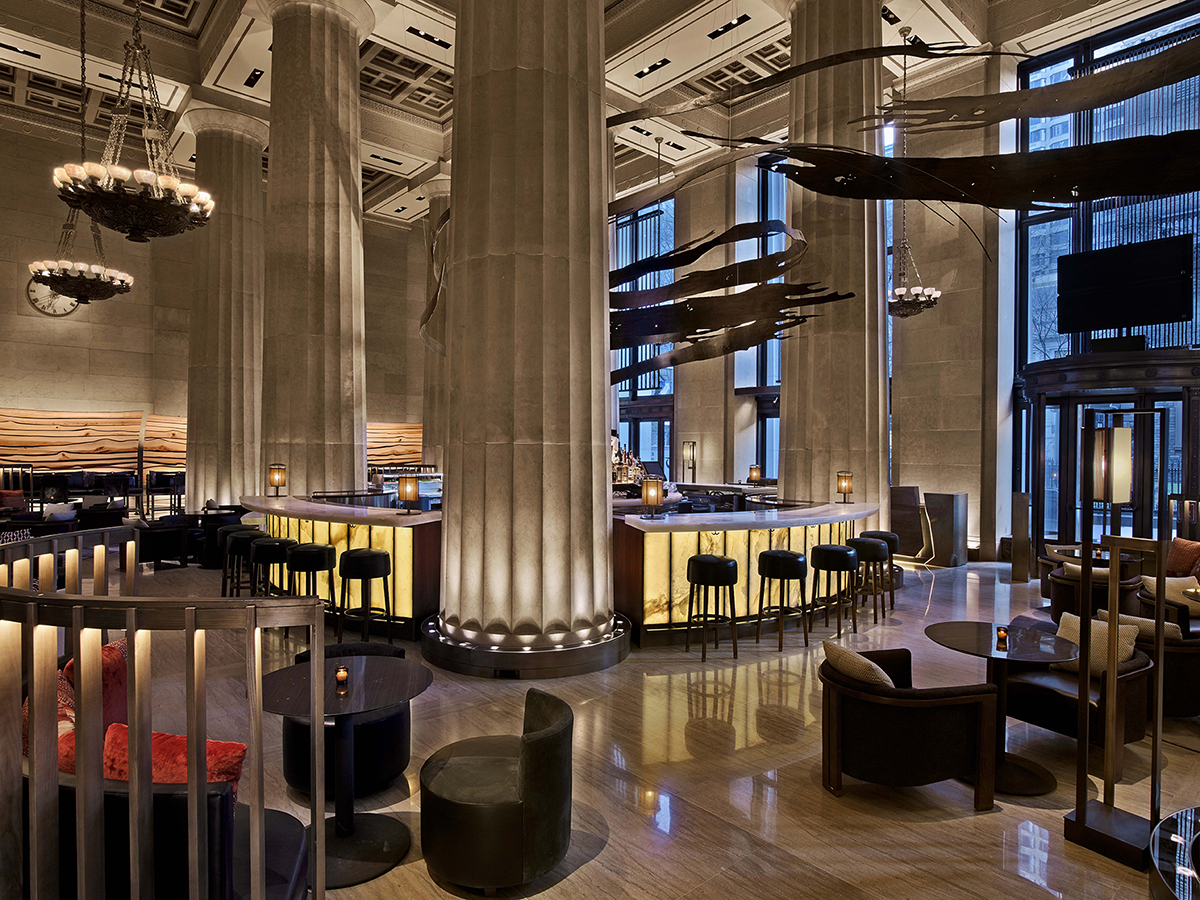 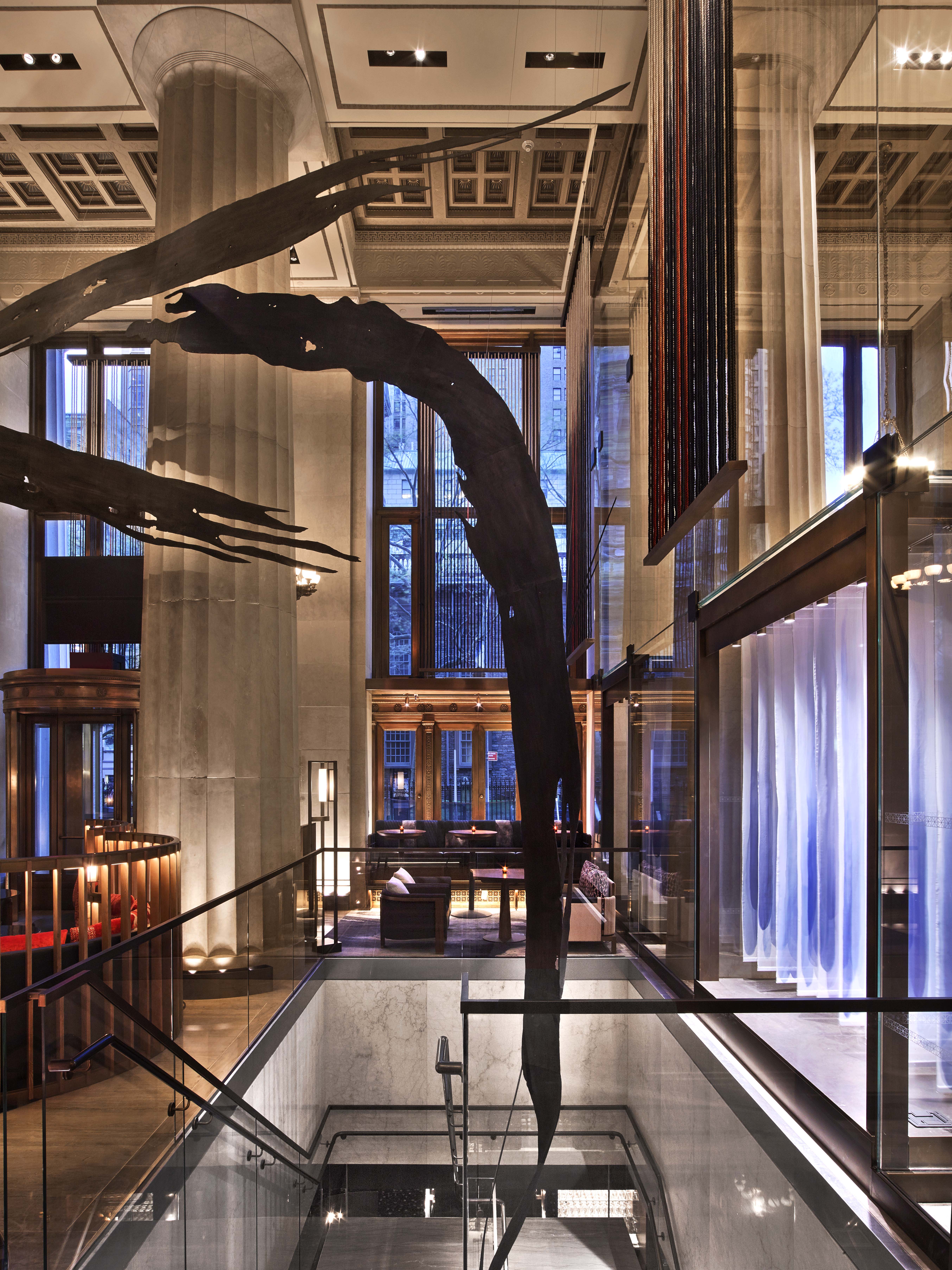 The combination of styles, periods and culinary delights is also reflected in the furnishings, which include patchwork fabrics inspired by popular Peruvian traditions, and in the Japanese design, which displays Japanese writing with unusual decorations. For example, black-painted white rope screens transfer the sumi-e china technique to the windows, while, hovering above the circular volume of the central counter, a carved carbonized wooden sculpture by John Houshmand represents a vortex of ink in mid-air. It recalls – one might think – those seemingly improvised garnishes that complete the dish with an unpredictable gesture, a signature of the most skilled chef. From here, a brushstroke extends towards the stairs to accompany the guests to the main dining area, in the basement. A room in which the languages of design, technology and craftmanship are already mixed at the base of the staircase with a river rock wall with LED displays that show images designed by the Rockwell studio. This mix of styles is also evident in the wavy finish that imitates the folds and cuts of special origami – kirigami – on the ceiling, in the stylized ash trees that seem to support it, in the Peruvian colours that line the seats, tracing out the shape of kimonos behind the backrests and in the shelves, that display the sake pots by Canadian ceramic artist Pascale Girardin. 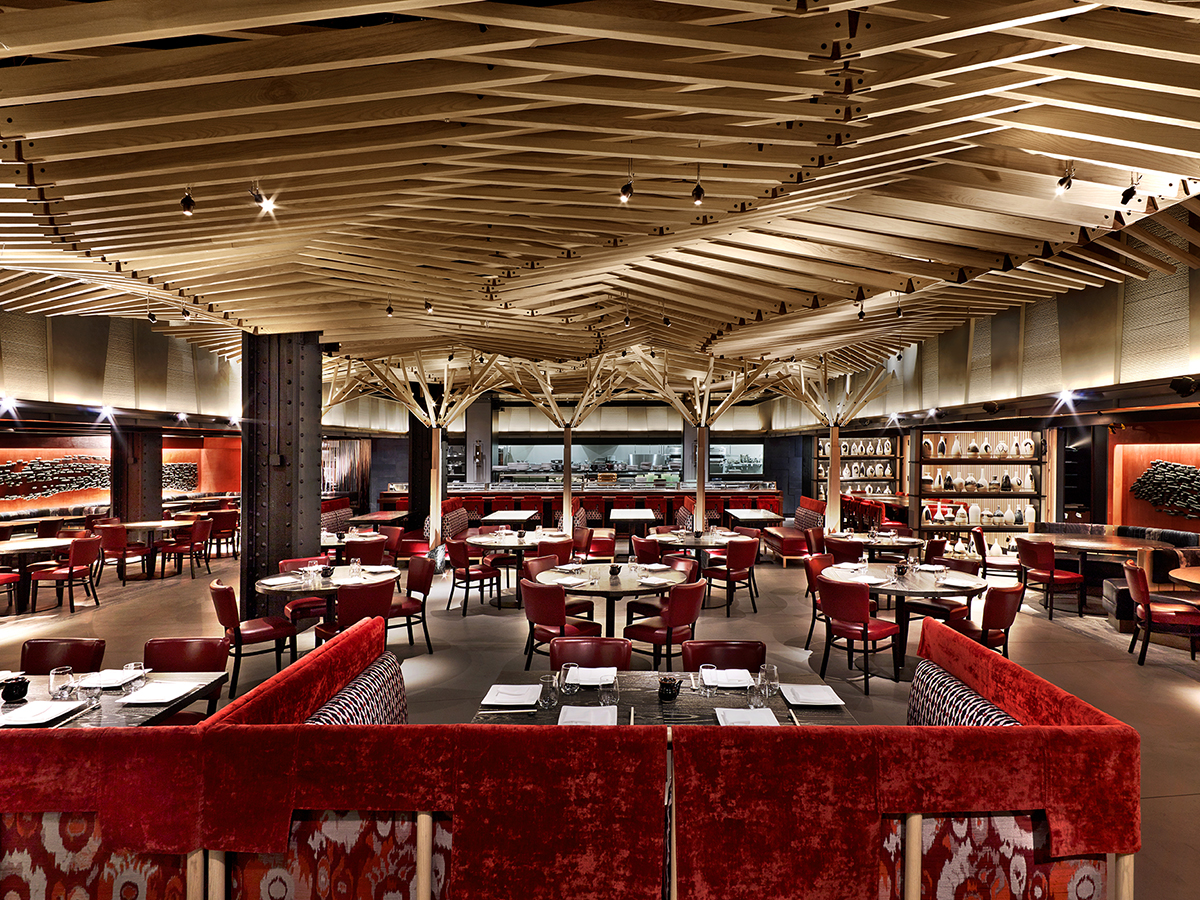