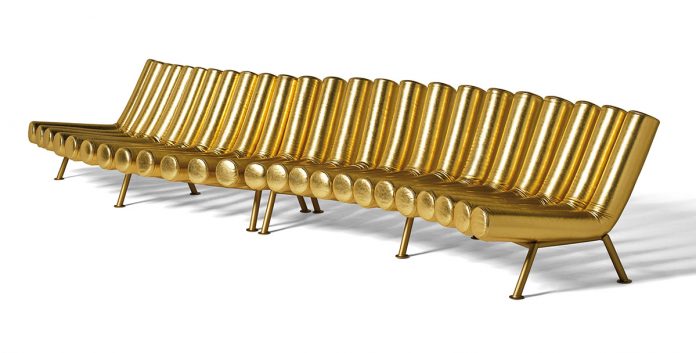 A symbolic place where disco, inextricably linked with pop culture until the mid Sixties, is rethought and re-elaborated by contemporary objects. Disco Gufram is the latest, electrifying project by Charley Vezza, the heart and soul of Gufram, on at Mediateca Santa Teresa from 17th to 21st April.

A visionary disco, combining past and present thanks to the reinterpretation of disco icons, conceived by three creative international names. Starting from the Italian duo Alberto Biagetti and Laura Baldassari from Atelier Biagetti, who have interpreted a historic upholstered disco series, drawing inspiration from the Linea Discoteca collection developed by the brand in the late Seventies for the creation of five different upholstered seating models which enter the home straight from the disco, revolutionising its spaces: Betsy, Tony, Stanley, Jimmy and Charly.

The Paris-based GGSV has created a ‘compilation’ of rugs which recreate all the magic of a dance floor: Dance Floor: brilliant colours and a variety of shapes, conferring a creative touch upon spaces.

design Rotganzen | photo © Leonardo ScottiThe last name of this creative trio, the Dutch pop art design studio Rotganzen features with its series After Party, including three cabinets and two coffee tables, a melancholy reminder of glamour’s fleeting nature, with the iconic disco ball imagined as though at rest, after a long night out.

An energising, kaleidoscopic and involving experience.

Nizza Paradise Residence, a dream residence in the district of Lugano