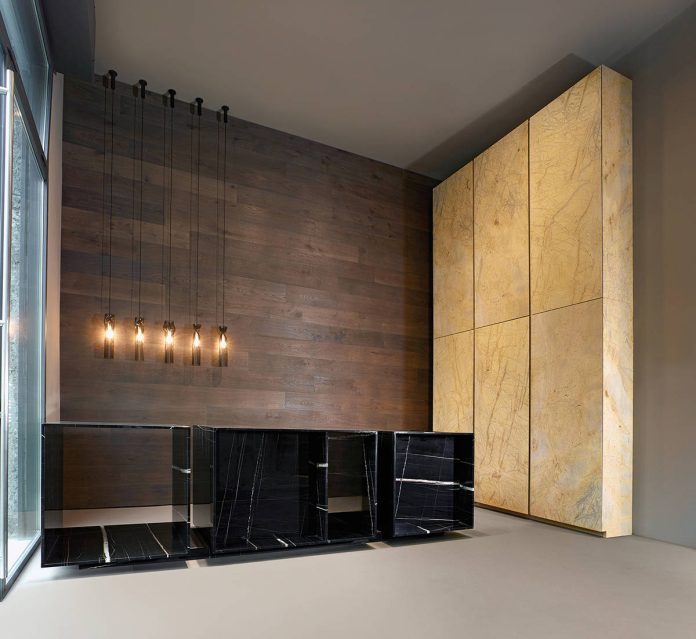 Seven scenographic displays on Market place in the central area of Fitzrovia. Minotticucine, the Verona-based kitchen production company, member of Gruppo Asso, makes its London début. The brand has opened its first flagship showroom in the British capital, with an evening which saw the participation of the guest of honour and architect Claudio Silvestrin, together with the Venturini family, at the head of Gruppo Asso, and the art director Alberto Minotti.

A flagship store of over 180 square metres, a minimal space, devoid of any aesthetic excess, expressing the brand’s absolute philosophy, grounded in “visual silence” and the centrality of human beings. This is where the new sculptural and material  models can be found on display, such as Anima, designed by Alberto Minotti, a functional unit entirely made from stone and precious marble, divided into different functions, hob, worktop and washing. Then there’s Incline, also by Alberto Minotti, “a cliff in the greenery”, a single unit stone kitchen also suitable for outdoor use, for barbecues and convivial garden or balcony dinners. Incline’s name is inspired by its distinctive feature: slightly inclined sides, at a 5 degree angle. It is characterised by its sheer size (250x85x90 centimetres) and ultra-resistant materials which do not fear atmospheric agents, such as stone and stainless steel for the structure. Hanami, the kitchen presented last year, diverges slightly from the single unit concept and reintroduces the handle to the company’s project range. A decision which is only apparently in sharp contrast with trends, deliberately inserting a new and “disturbing” element while also upholding the principles of the brand’s elegantly minimalist design.

This British opening is confirmation of the group’s determination to invest on international markets and comes after other new flagship stores around the world: Miami Algarve, Vancouver, Vienna and Seoul, as well as positioning in Barcelona, New York and the implementation of pre-existing multi-brand spaces such as Stockholm, Hong Kong and Tokyo.

Mr. Venturini explains: “London confirms itself as an essential crossroads for the international and world market: a strategic square, where presence is indispensable, despite the uncertainties and particular period which England is currently going through following the brexit effect and its government’s negotiations for leaving the European Union”. He concludes his analysis by adding: “We decided that we wanted and had to be present here, immediately, and now the time is ripe for fully entering the London market”.

Selecta by Lema. The bookcase in evolution