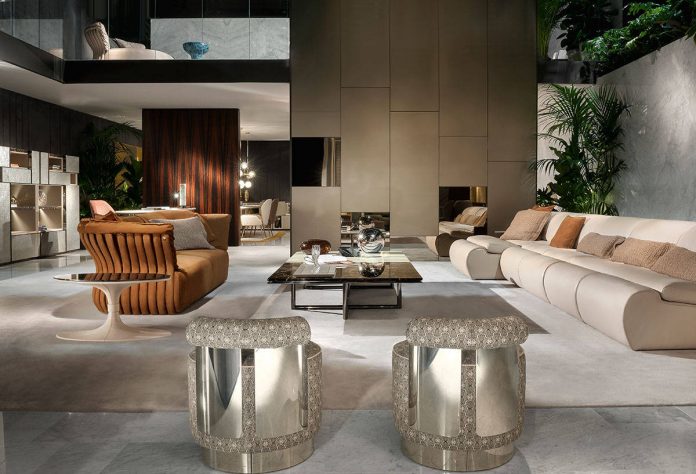 Strong of a continued presence all around the world and especially in the cities where the highest living standards prevail, Cornelio Cappellini confirms a very positive trend and supports – a bit countertrend – that “you can work very well also without the contract sector”.
The choice of the company to be where it actually ‘counts’ has proved successful: today Cornelio Cappellini (led by the sons of Cornelio, Franco and Claudio, but with the founder still actively present in the company) decorates the windows of the most important showrooms in Abu Dhabi, Astana, Baku, Doha, Dubai (where there are two of them), Teheran, Jeddah, Riyadh, Moscow, Miami, Tokyo, Taipei and the ten largest cities of China. New openings are also on the way, including flagship stores in Kunming and Linyi (China), Manama and Kiev (a statement for those who do not consider Ukraine as an opportunity).
The knowledge of materials, even those usually less employed, and its tasteful combination: it looks like an old recipe, but the level of quality and service proposed by the company of Mariano Comense (Italy) is not easy to find even in the rich national panorama.
Alongside the manufacturing and woodworking skills, the company’s innovative idea has been to find trusted and selected partners for its sales points around the world, capable of transmitting the value of the proposals, beyond the aesthetic and formal aspects. The so-called large “projects”, in fact, often pass through as equal large showrooms that over time have equipped to meet the demands of the design. The “haute couture of interiors” by Cornelio Cappellini is a valid demonstration of how it is possible to succeed in the trade industry with classic high-end furnishing proposals.

At the FuoriSalone arrives the Audi Mind Movers