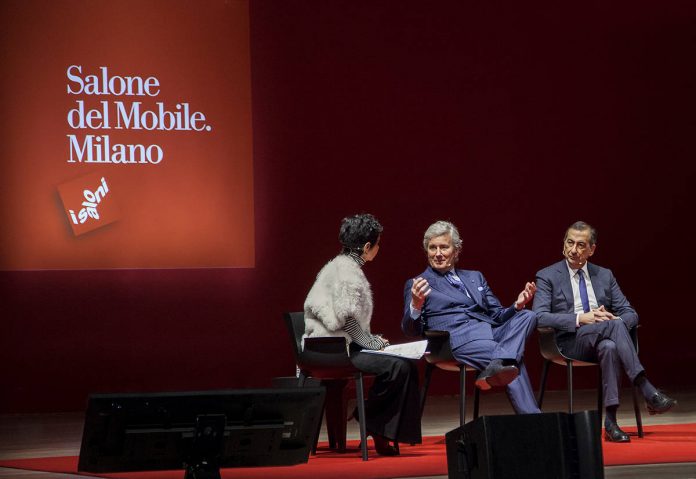 Attention has shifted from the event to the setting. Because details can not exist in the absence of generalities. In a sort of inductive process which encourages reflection on the universality of both entities’ defining values, the Salone del Mobile establishes direct contact with the city of Milan.  By means of its first ever Manifesto, “not only an act of love for the city and all actors which have contributed towards its success, but above all a declaration of intent which lays the foundations for a new way of thinking, system and project development”.

This concept was the main topic at the presentation conference of the 57th edition of Salone del Mobile.Milano, which took place today in the great hall at Bocconi University. Focus was not on Biennials (this year Eurocucina with its collateral event FTK and Salone Internazionale del Bagno), nor on SaloneSatellite (an essential collective which accompanies the 21st edition’s main event, centred around the theme of Africa/Latin America: Rising Design – Design Emergente). The limelight was on what goes on behind the scenes and which constitutes the foundation of all these events. A system of relations grounded in “positive contamination” between actors – small and large businesses and entrepreneurs, designers, architects, bodies and institutions – who have played a role in the Salone’s story of success.

The Manifesto features words like: emotion, business, quality, project, system, youth, communication and culture. Words laden with meaning which must be transformed into tangible action so that they are not reduced into rhetoric.
There is certainly a determination for action, palpable in the words of the President, Claudio Luti: “We must do even more if we are to win the global challenge: we must aim for innovation, sustainable quality, the ability to forge a system and culture, develop the will to share information and promote young generations. Therefore, the Salone also continues to renew itself and reinforce its bond with Milan. The first Manifesto is a commitment to always do better, it extends an invitation to Milan, the city at the centre of everything, where everything first began, to network and grow together”.

A step in this direction would be the creation of a Museum of Design at the Triennial, exalted as a necessity by the Mayor of Milan, Beppe Sala, which would bolster the Manifesto’s scope by working on public-private relations. The Mayor also drew attention to another of the Manifesto’s points: youths (“Milan is a university city with 200 thousand university students, of which almost 20 thousand are from abroad, constituting 14% of the population”). Mr. Sala was followed by Piero Lissoni, Fabio Novembre and Stefano Boeri who were invited onto the stage in the great hall.

The exhibition-installation “Living Nature. La Natura dell’Abitare”, is an immediate point of connection between the fair and the city, on occasion of Milano Design Week in April, developed in conjunction with studio Carlo Ratti Associati (CRA), in Piazza del Duomo, in front of the Royal Palace.

Doha, the platform of big projects

In the footsteps of the Great Masters