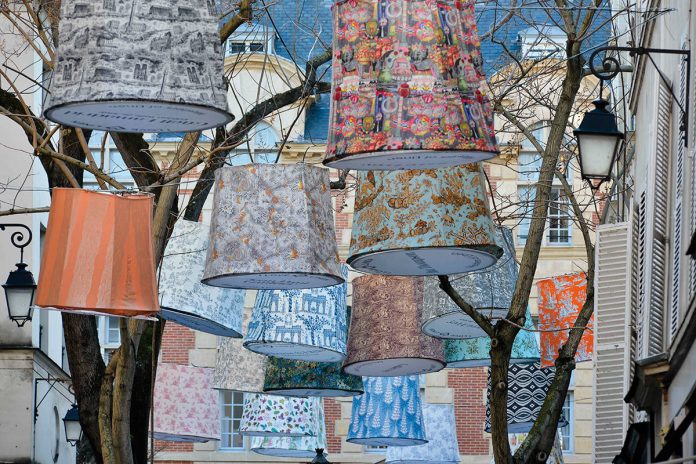 Just as with previous editions, this year, from 18 to 22 January, under the outstretched green wings of an exuberant altar, the over one hundred international ‘editeur’ at Paris Déco Off have carte blanche for their showcases along Rive Gauche and Rive Droite. The most important thing is that they are colorful. Because in interior decoration, as in the rest of the fashion world, this expression of color and its infinite combinations is total and the new collections of interior fabrics, wallpaper and rugs proclaim this triumph. In all its forms, from color block to jacquard prints, from optical to animalier, from the plant world to the mineral world. Daring colors and combinations tell stories from around the world, of emotions and nature, enhanced by sophisticated artisan techniques, by natural fibres such as raffia, abacà and palm or by rich yarns such as silks, velvets and mohair. The best showcase will receive an award from a jury chaired by Chantal Thomass on Thursday 18 January, during an evening at the Hotel Drouot, where awards will also be presented to students of the Ecole Bleue in Paris who have created the best projects on the theme of ‘L’assise revisitée’, alongside the first charity auction organized with unique pieces from the collections of the companies participating in Déco Off. To accentuate the festive, creative atmosphere and to guide the approximately 30,000 visitors expected at this exhibition, which is spread between the I, II, III, VI and VII arrondissements along Rive Gauche and Rive Droite, the urban tour route is decorated and illuminated by bright lanterns covered with linen, made by Masters of Linen, or with Trevira CS fabric. The squares that punctuate the route – Saint-Germain and Saint-Sulpice, Rive Gauche, and Place des Petits-Pères, Rive Droite – set the stage for an ‘Exposition éphémère’ with large-scale reproductions of the fabrics and wall coverings presented in the showrooms. At the Hotel de l’Industrie, color, in interior design, fashion and cosmetics, is also a topic for discussion in a series of conferences organized throughout Saturday 20 January and curated by Jean-Gabriel Causse, a designer, writer and expert in the relationship between color, perception and behavior.

The second leg of Archichef Night 2017 comes to Rome