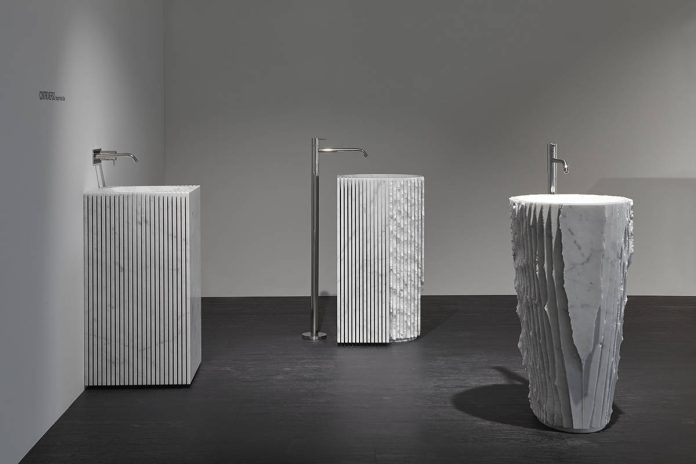 The elegant presence of Antoniolupi makes its début on the international scene of new designer and quality proposals at Pure Architects, the new section at Imm Cologne, along with the equally prestigious Maison&Objet Paris.

Scenarios include the floor-standing washbasin Controverso designed by Paolo Ulian, with its form generated by subtraction from a block of Carrara marble, interpreted by the human hand, bringing different forms to life. A monolith characterised by a stereometric shape, carved to explode in all its intrinsic strength. A washbasin perfect for contemporary interiors and more.

The ironic single-command mixer Mayday by Gi-ra can be adapted for several users and is shaped like an emergency button which becomes a coloured recessed tap offering a smart operation mode.

Gi-ra has also designed Azimut, which is more than just a shower head: it generates an entirely innovative shower experience concept. An essential stainless steel and Derlin black cylinder, seamlessly combining technology and design. The heart of the project is a special connection which enables the ceiling or wall-mounted shower head to rotate and project the water stream at over 180 degrees. Four aerators and 336 nozzles guarantee an exclusive and powerful water spray.

Also on display we have Eclipse by Marco Di Paolo: a Cristalplant tub featuring enveloping lines and a particular egg shape which welcomes and ergonomically protects the body, as well as Calice designed by Mario Ferrarini and Domenico De Palo, a Corian washbasin characterised by barely perceptible forms, through which Antoniolupi continues its research into the theme of washbasin and wall integration.

The creative hub of designjunction+Dwell on Design

Decorating is a game thanks to augmented reality