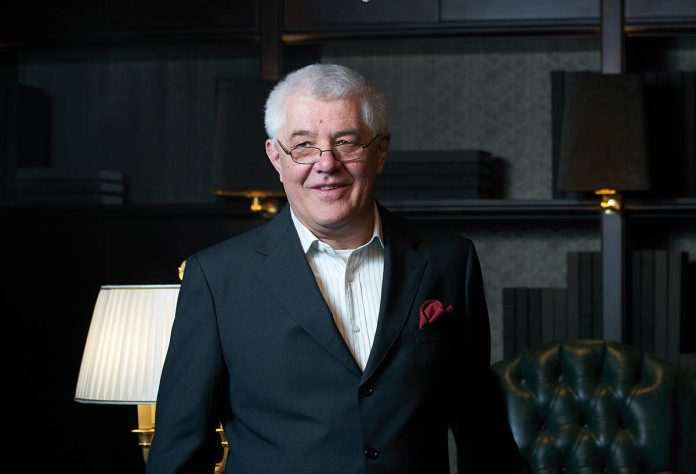 Fratelli Boffi is nearly 90 years old. How do you draw on that experience and back catalogue of products?
The art of woodworking is in our DNA. Our company was formed in 1928 as a school of wood engraving and we’re now in the third generation. Back then, we didn’t sell finished products, we just produced the engraved sections. We were heavily influenced by French styles – Lombardy has always been influenced by France. When we did decide to offer finished products, we kept that culture of engraving with us.

You combine luxury, understated collections with more provocative pieces. How did that approach come about?
Ever since the 1950s, our company has collaborated with the US market and American department stores, from Bloomingdale’s in New York to Marshall Field in Chicago. Twice a year, they created “modern rooms” – sample rooms featuring innovative pieces. We took part in the project between the 1960s and 1985 and it certainly helped the business to grow. Their interest in innovation become part of our way of thinking. The period between the 1970s and 1980s was a really important chapter in our history, but when the US market changed strategy (and began to search our cheaper markets) we had to find another direction. Despite that, our love for experimentation remained. In the 1980s, we started collaborating with La Pietra, a partnership that went on to last 15 years. That was the period when we were taking part in Abitare il Tempo, an event that combined art and furniture, with loads of creative installations next to each other. It was “modern rooms” on a smaller scale.

Is Fratelli Boffi more about trade or design nowadays?
Design represents around 70% of our business, while retail accounts for the other 30%. If you look at the geographical spread of our business, 95% of our revenue comes from abroad and only 5% from Italy, and that’s from projects completed in collaboration with architectural studios. We’re currently working on a large-scale residential project in Qatar, which came about thanks to our links with Design 2000. We’re also working with the management of the Hotel Schweizerhof in Zurich, a building we designed five years ago and that has got back in contact to ask us to renovate the rooms. It’s important for us as a business to have solid references to help us present our work to new architects, designers, developers and interior decorators. We want that to happen in our stores, which are now kitted out for us to meet with designers. Put simply, contracts stimulate retail, which in turn can lead to new contracts.

Where are you most successful and where would you like to develop further?
Up until two years ago our biggest market was Russian, but that’s tailed off recently. Currently it’s about half and half between Europe and the Middle East – we recently opened a showroom in Baku. After an initial meeting with a potential partner at Milan Furniture Fair, we sealed an agreement whereby Fratelli Boffi supplied the furniture and our partner dealt with the space itself. We opened this flagship store in March after two years’ work. In the near future, our main objective is to consolidate our relations with retailers already present in markets we’re operating in. At the same time, we’re building up a network of new links with local partners and that should lead to more openings in the future, but at the moment it’s a project in the embryonic stages. In any case, we would reproduce the approach we used in Azerbaijan, working with local operators who know the market and its dynamics.