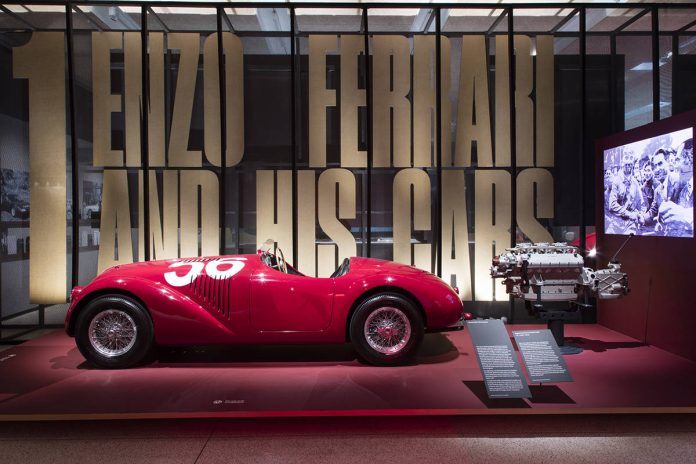 A burst of Italian enargy pervades London these days, due not only to the many Italian tourists who crowd the streets dressed up for a party. On the occasion of Ferrari's 70th anniversary, the London Design Museum celebrates the Maranello-based automotive company with the "Ferrari Under the Skin" exhibition, running until April 15th 2018 in the exhibition spaces in Kensington. The protagonists of the event are the cars that have made up the history of the company: fourteen vehicles starting from the first Ferrari, the 125 S (the only existing official replica following the original design), designed by Giuseppe Busso and produced for the first time by Enzo Ferrari on March 12th 1947, to the 275 Gtb, introduced in 1964, designed by Pininfarina and characterized by the aerodynamic coupé body, including the Testarossa (1984) and the F40 (1987). But there is also the F1-2000, the circuit car driven by Michael Schumacher when he won his first world title for the Maranello team designed by Ross Brawn and Rory Byrne, and finally the brand new hybrid model with integrated electrical technology launched in 2016.

The story begins with the myth of Enzo Ferrari, who in 1929 founded the “stable” and built the first car in 1947. He loved to repeat: "Race cars are neither beautiful nor ugly. They become beautiful when they win". The narration is developed through sketches, hand drawings, models, vintage photographs. The fable continues with the masterpieces: the 166 MM Barchetta of 1950, the first driven by Gianni Agnelli; the 250 GT Berlinetta passo corto “Sperimentale” in 1961, driven by Stirling Moss; and the famous 250 GTO of 1962, designed by Giotto Bizzarini, incorporating an incredible modernity for the time, more power, better suspension, aerodynamic design, speed and stability. An exciting journey that ends in the present with the LaFerrari Aperta of 2016 in the hybrid version, which incorporates the electric battery to give a striking performance boost as well as a reduction in fuel consumption. A demonstration of how Ferrari road cars integrates the intense R&D activity and the progress of Formula One.

The “style “ decoration as a language

Dubai in three steps by Moroso