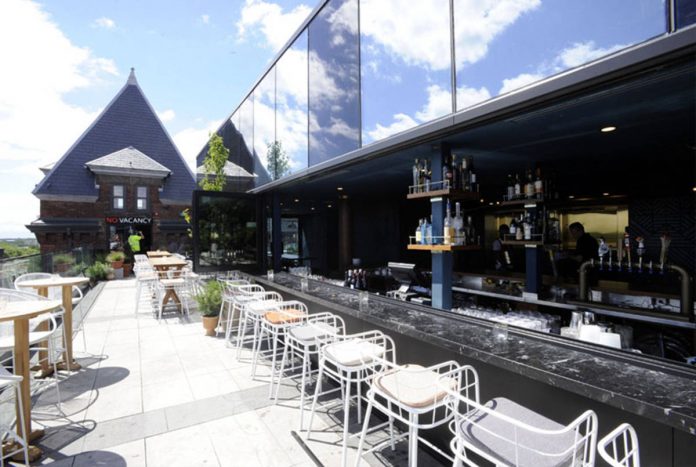 The Rooftop at the Broadview Hotel, Toronto is another project of international scope, once more involving Chairs & More with its cheerful and comfortable Jujube stools, part of the eponymous collection conceived by 4P1B Design Studio and which also includes sofas, armchairs, stools and ottomans, characterised by the original net pattern of the enveloping back in tubular metal.

A contract project enriched by white finishings which further enhance the graphic design, among the dark tonalities of the Rooftop terrace.

The location is spectacular: the Rooftop is on the the seventh floor and is partly protected by a large glass skylight, offering breathtaking views of the city.

A fascinating location in the iconic East End hotel, seamlessly blending vintage flavours and modernity, in an impeccable mix of fine furnishings inspired by tradition, such as in the suite, along with more colourful and contemporary interiors, such as the bar, restaurant and events halls, including the rooftop.

The entire building which hosts the hotel is equally worthy of mention, in virtue of its rich history dating back to 1891. It has preserved its own architectonic identity, despite the renovation and change of use.

Chairs & More sides with the UN

MisuraEmme, an encore in Mexico

Minotti. The contrasts of the outdoor