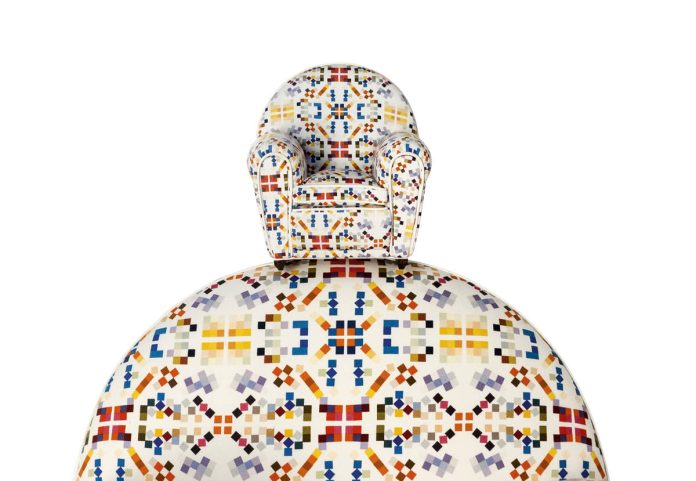 A colorful, sunny texture, an ultra-contemporary pixelated geometric composition that could only result from the boundless, lively imagination of children. The new finish for Poltrona Frau’s two Vanity Fair Limited Editions was the fruit of the creativity of two young designers who attended a workshop held at the Poltrona Frau Museum in Tolentino. The workshop led to a project that found its perfect setting in Favara, but has a global appeal thanks to its outstanding, emotive design.

The two limited editions of the brand’s iconic armchair (50 copies of the Baby Vanity Fair were produced and 100 copies of the miniature) were made to raise money for the creation of the Farm Children’s Museum in Favara, part of the cultural and social redevelopment of the Sicilian town promoted by Andrea Bartoli and Florinda Saieva.

«We recognized ourselves in many of the values that underlie the Farm Cultural Park, therefore, we, who are in a certain sense global ambassadors of Italian excellence, liked the idea of promoting it to our public – explains Poltrona Frau’s General Manager, Nicola Coropulis – We have designed a 5-stage world tour through London, Shanghai, Paris, Milan and New York to coincide with the main trade fairs in those cities in order to promote the project, including through the involvement of eminent ‘travel companions’ who have agreed to endorse the events».

Another partner in this enterprise is Roberto Lazzeroni, who today (Friday 24 November) will be the star of a workshop on the theme of “Nature and the future” aimed at children to explore “fresh, immediate, childish” design. «I find the limited edition of the Vanity Fair delightful – remarks the designer – I also believe that Poltrona Frau’s support of the redevelopment project of Favara is important and socially relevant. I hope that other companies will follow this example».

Poltrona Frau has been involved in other initiatives of this nature such as the recent Run4Tolentino, in collaboration with the brands of Gruppo Frau, to raise funds for the expansion of the primary school in Tolentino.

«There is a symbiotic relationship between the company and the local area which is one of the reasons for Poltrona Frau’s workers’ strong sense of belonging and identity. For this reason, we believe that initiatives such as this and Run4Tolentino are part of the company’s social role, which contributes to culturally enhancing and enriching the local area – continues the General Manager – Design does not exist outside of the world that it represents and interprets and it can therefore also contribute to making this world better. It can do so by identifying new furniture features, promoting the development of spaces that prioritise people and their needs, promoting research into new, eco-sustainable materials and even by simply ‘designing’ a world made up of beautiful things that satisfy and delight those who use them».

The Limited Editions project is completed by a third version of the Vanity Fair in the classic size, featuring a special Pelle Frau nubuck coating in sepia shades inspired by Arab Sicily and the tuff architecture on the island and available in 75 copies.

Illulian and its universe of contaminations