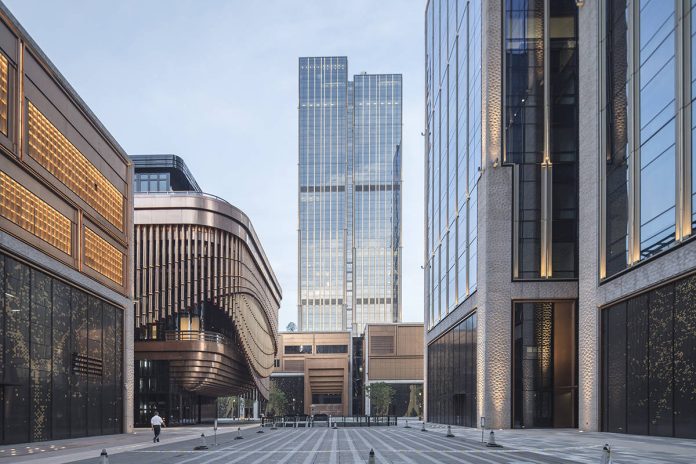 Another piece has been added to the complex puzzle that is the urban tapestry of Shanghai. Overlooking the Huangpu River, the area is caught between the old city, the historic Bund district with its colonial past and the modern financial quarter known as the Financial Belt. Recently completed to a design by London-based studios Foster + Partners and Thomas Heatherwick, in collaboration with the East China Architectural Design & Research Institute (ECADI) and Martha Schwartz Partners, the multi-use Bund Finance Centre complex – owned by Fosun Property Holdings – encompasses 426,000 sq m, comprising offices, retail, hospitality and culture.

There are eight buildings in total, all of different shapes and sizes. They are simple and square in their design, split into two separate areas and interspersed with pedestrian walkways and communal spaces packed with green space. To the south stand the two tallest buildings in the complex: twin towers measuring 180 metres in height. A car park and service facilities are located under the towers, while the BFC shopping centre – with terrace, shops, gym, restaurants and cafes – stands on the ground floor and the office spaces occupy the upper parts of the towers. The five buildings in the northern section of the complex, however, are less tall, bringing them in sync with the architectural proportions of the rest of the waterfront. These are home to further office space, the Wanda Reign on the Bund hotel, run by Chinese company Wanda Hotels & Resorts, and the headquarters of the Fosun Foundation.

As Gerard Evenden – Head of Studio and Senior Executive Partner at Foster + Partners – explains, the aim was to create “a bridge to connect modern China with the more ancient side of the country, drawing inspiration from both aspects to create a unique, coherent new combination”. This conceptual fusion is particularly clear in the selection of materials used for the architectural structures, where the high-performance glass facades are paired with granite frames featuring a subtle ashlar effect achieved by hand. The grey shade of the granite serves as a neutral, imposing backdrop, underlining the vibrant, warm tones of the surfaces and panelling in bronze.

The combination of old and new is again apparent in the building that represents the heart of the entire complex, not to mention the social hub of this latest edition to the urban landscape: the headquarters of the Fosun Foundation. This multi-functional cultural centre – comprising four storeys above ground and three under the surface – hosts exhibitions, shows and performances spanning art, theatre and fashion. The foundation building, whose open structure is inspired by the stages used in traditional Chinese theatre, is “like a gem waiting to be discovered among the other buildings, in which the most pressing need was to create a bond with the outside world”, explains Thomas Heatherwick. Thus, the huge building is open on all four sides, the base clad with bronze plating, while a moving ‘curtain’ composing three overlapping screens of varying lengths provides privacy when necessary. Fitted with a circular motor connecting three different platforms, the ‘sails’ open and close the stage in the direction of both the plaza and the river, thus allowing the space to be adapted for different events and uses, instilling a continuous dialogue with the urban context and creating stunning optical effects. With collaboration from the engineers of Tongji University, the screens were made from 675 magnesium alloy tubes, of lengths varying between two and 16 metres and featuring patterns in relief. The resulting structure resembles bamboo canes, only made from metal with a red cut at the bottom, or – to give a more western equivalent – the pipes of a church organ.

According to Evenden, “the cultural centre is a winning combination of craftsmanship and technology. While inspiration is drawn from Chinese traditions, the centre also incorporates innovative systems to protect against earthquakes, typhoons and extreme weather”. In regular weather conditions, however, the façade rotates in time with music, as if dancing, for a few hours each day.

Ikeda, a modern castle and symbol of (agri)culture

Alliance 1892, the architecture of rebirth