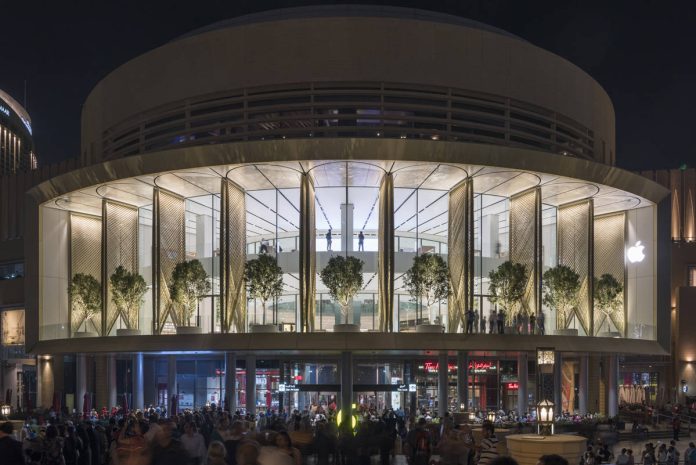 In the space of around a minute, the façade looking out onto the Dubai Fountain goes from closed to open, giving those on the inside terrace an unparalleled view of Burji Lake in at the Dubai Mall: the tallest water fountain in the world to you and me.
Given the stunning surroundings, it was unthinkable for the Apple Store not to attempt to bring the outside in, and sure enough its double-height, transparent façade rips up the traditionally introverted design of shopping centres and ushers in a new era.

The store, which was opened last April and looks out over the water of the lake, was designed by Foster + Partners and Jony Ive, Apple’s Chief Design Officer. Intended to be a place for people to come together, the store occupies a circular space on two floors, resembling a covered town square almost, with colonnades and a five-metre-high terrace complete with trees and benches. The façade is also capable of dealing with the harsh local climate, protecting against the light and heat of the day with its system of mobile solar wings. These huge motorised shutters transform the façade into a masterpiece of kinetic engineering, bringing an element of theatre to the urban landscape.
A homage to the Arabic mashrabiya windows, the 18 wings – which measure 11 metres in height and three in width – combine aesthetics with function to great effect. Each mesh structure features 340 openings created by the juxtaposition of multiple layers rather than weaving. Made from carbon fibre, with its lightness and resistance to oxidisation, the mesh becomes denser where exposure to sunlight is at its most intense. The huge panels act as screens, serving to protect and decorate at the same time while ensuring an optimum inside temperature. The system ensures the outside is visible from both floors, while allowing natural light to penetrate the store, the design of the panels creating stunning shadows all around.

The store itself is free from structural obstacles and includes a number of functional areas, many of which are positioned along the Avenue, a feature of the new generation of Apple Stores opened around the world since 2015. Apple Dubai Mall is the brand’s second opening in Dubai, but only here can visitors enjoy the night-time spectacle of the Dubai Fountain right through until closing time at midnight.

Manhattan: the show of the changing city