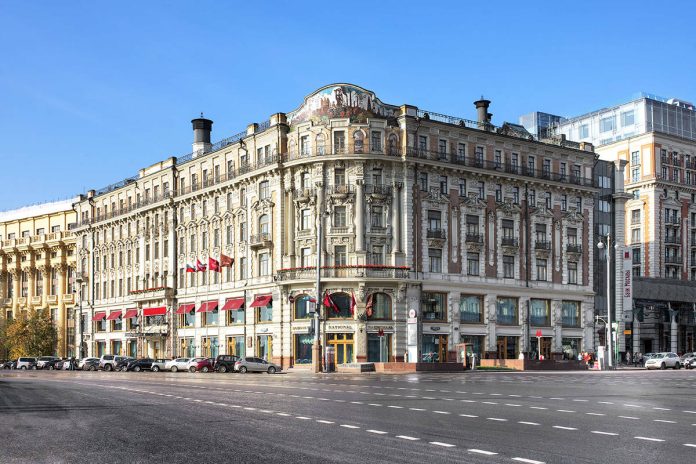 The vicissitudes, the culture, the characters that have characterized the Federation in the last century return to life within the Hotel National, in its exclusive rooms, through antiques and artwork scattered in the spaces, the atmosphere of a coveted magnificence that lives in it, a testimony of a deep and rooted richness.
Overlooking the Red Square and the Kremlin, the National stands out in the heart of the city.

Built in 1903 by the renowned Russian architect Alexander Ivanov – combining Renaissance and classic architecture with modern decorative elements – the hotel has been for over a century a public, political and cultural point of reference, having hosted state leadership and governments, diplomats and businessmen, military officers, scientists, writers and musicians: from the writer Mikhail Sholokhov to Pablo Neruda, from Nobel Prize winner John Steinbeck to Plàcido Domingo, just to name a few.

The hotel has been directly involved in many historical events: the Revolution of October 1918 changed its destiny and transformed it into the “first home of the Soviets”; likewise, during the Second World War, the hotel became a base for the anti-Nazi coalition. The history of the city also became an integral part of the hotel when in 1931 it underwent a profound restructuring: furniture and furnishings were procured among the assets of patrimony and palaces recovered after the revolution. The National also acquired a ‘museum’ allure. Even today, each of its 202 luxurious rooms is characterized by exclusive 19th-century style furnishings, its 55 suites are adorned with authentic and rare pieces of antiques. All combined with ultra modern amenities and comfort. Its 13 meeting rooms, the fitness center, the Orchidee Beauty Studio make it an ideal location for both business and leisure guests looking for an elegant stay.

In 2009, the National became part of the Luxury Collection by Starwood Hotels & Resorts, a “starred” ensemble featuring the largest hotel facilities (around 100) located in 30 countries around the globe.

A night in the cooler