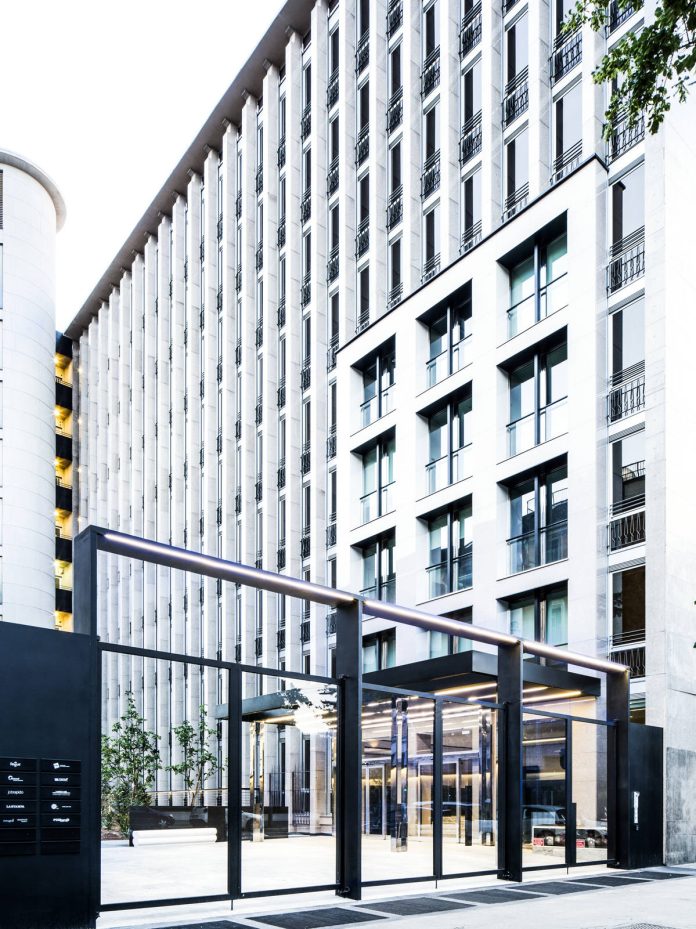 The rationalist and visibly Milanese work by Pietro Lingeri in the late 40s, located at Via Paleocapa no. 7, now an office building, recovers its original formal rigour, in a renewed approach towards the outside world and the city.
Scandura Studio, behind this architectonic renovation, has revisited and re-proportioned the façades according to the initial project’s characteristics, while skilfully introducing a few new elements looking over the road and public path, which exude essentiality, poise and transparency. From the glass and metal gate with projecting roof on via Paleocapa, to the  more distant garden enriched with new woods.
The metaphysical square precedes the green space, a homage to the artists of the historic Milanese gallery Il Milione, created with elegant stylised elements: metal wall decorations, white stone seating and parapet, with illuminating and decorative trilithic elements. Spaces conceived to guides us towards private spaces within, dedicated to work, where the hall and the design of furnishings constitute a continuity with materials used outdoors: stone, metal and glass.
The building will be inaugurated on October 17th, presenting itself to visitors and hoards of passers-by not only as a place of work, but also as a chance to explore Milanese 20th century architecture, through the images of Milano Aperta, a cycle of photographic exhibitions organised by Urbanfile Dodecaedro Urbano, scheduled from October to April 2018. The initiative will be articulated around three titles: The inter-war years, the post war period, and the years of economic boom.

Dubai in three steps by Moroso

Minotti Collezioni, a modern mood with a classic style