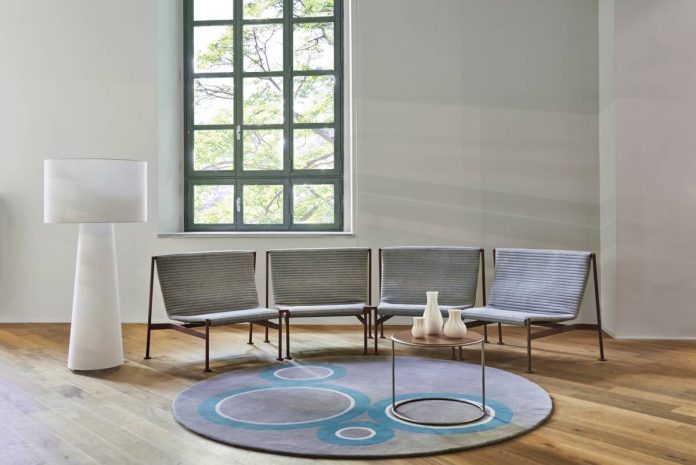 The professional story behind Cappellini and Herkner first began in October 2012, when the young German designer (born in 1981), was sent to collaborate with a product at an installation at the Maxxi in Rome, promoted by Alcantara (of which Cappellini was art director), dedicated to the new under-35 generation of international designers. This was when Giulio Cappellini, who is now art director at the historic Meda-based company, heralded Sebastian Herkner as much more than a rising star. It wasn’t until four years later that conditions for collaboration arouse, culminating in the Telo Lounge seat collection in 2016.

Herkner himself explains to IFDM: “Working with Giulio Cappellini on a contract project truly enriched me, but it was complicated: it was no easy feat creating a collection of seats attractive not only to the office world, but also for all sectors in which lounge interiors are important. The sector is brimming in proposals and so it took some effort for me to strike a balance between my idea, requests from companies and contract market potential. Constant dialogue with Giulio was fundamental”.

As Giulio Cappellini explained, “Telo Lounge has already been met with positive acclaim in Europe as well as at Neocon, Chicago. The north American test was a crucial part of the international strategy of a brand belonging to an office contract colossus, Haworth, which despite exuding its own, independent allure, must also be capable of optimally exploiting synergies developed when you are part of a group. Of course London is a central market for the company (for whom export constitutes 80% and contract generates 70% of total turnover) and the city will continue to channel economic and professional energies. This is why the showroom was conceived based on this particular model”.

Faced with the inevitable question regarding the overexposure of the word “lounge” in reference to the Telo collection, both designers chose to focus on the system’s flexibility, colour varieties and its modularity which enables seats to be transformed from accessory seats for shared spaces, to work stations.