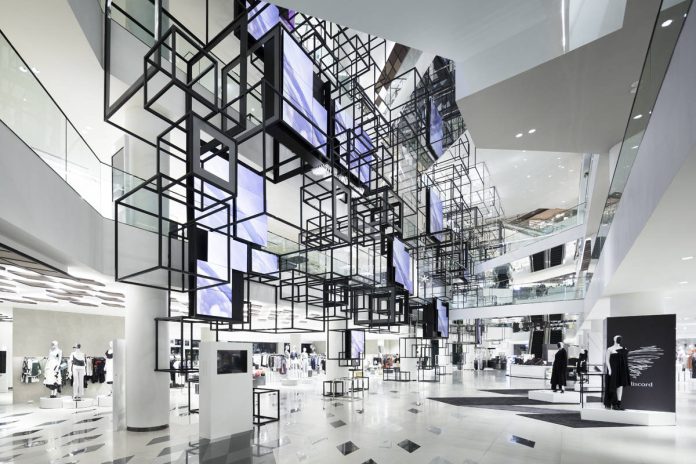 You leave the real world behind as you become immersed in an enchanted atmosphere. It is reminiscent of one of those fantastic tales in which you pass through the wardrobe to enter another dimension. Entering the new, magnificent Siam Discovery shopping complex in Bangkok, Thailand, is an impressive experience to say the least. The magic wand belongs to Nendo, the Japanese design firm headed by Oki Sato, who is acknowledged as a master of poetry and ‘magic’ in design.

Halfway between a shopping center and a department store, the building has been completely redesigned inside and out, starting with the main problem, namely that it was a structure with limited public access and minimal appeal. Inside, a series of circular entrances lead to the main entrance, which is now united and extended into a single 58-meter long corridor that takes visitors into the heart of the building.
At the centre of the atrium, there is an impressive structure/sculpture consisting of metal cubes with a unique outer form, which randomly contain monitors, digital signage, merchandise displays, serving as the store’s directional hub. The regular hexahedron motif is repeated several times, on the wall that frames the elevators, on the floor and on the symbol that identifies the brand itself: a little man with a slightly open box in place of a head. “A symbol that expresses curiosity and intellectual creativity, qualities that characterize the company.”

But the Tokyo team is at its best in 13 different sections. Here, everything is possible with furniture entirely designed by Nendo. The dressing rooms are an enchanted forest of grills and mirrors; the women’s shoes department, a forest of cylinders, whole or in cross section, which bloom on an island bordered by the patterns on the floor; the men’s shoes department evokes a forest with trees and wooden bushes. The women’s clothing department plays with surfaces and deconstructs forms: solid lines appear liquid, alternating empty and full spaces are tastefully juxtaposed, without any invading volume. The materials also lose their visual identity: marble looks like butter that has just been cut, while metal plates resemble paper origami. The eyewear area is populated with totems with observant ‘eyes’; the beauty department is a cross between a china shop and a pharmaceutical laboratory; the gadgets are displayed in bubbles suspended in time.
Naturally, the ‘cover of the fairy tale’ – the outside of the building – is equally remarkable. The cube motif is repeated on the façade, designed as a double skin of further insulation to protect the store from the oppressive heat of the Asian city, and external barriers have been demolished to make Siam Discovery even more accessible and visible. It is truly unmistakable.

Sojourn in the moonlight