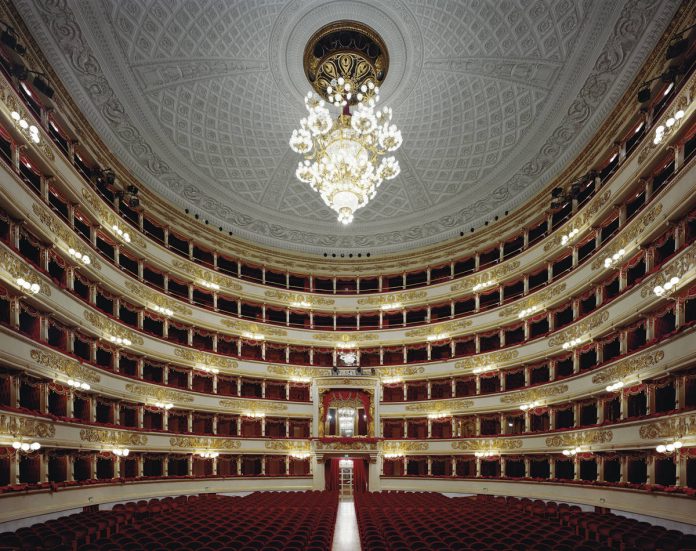 La Fenice in Venice, the Royal Opera House, Covent Garden in London, the Palais Garnier in Paris, the Mariinsky Theatre in St. Petersburg, the Kungliga Operan of Stockholm, the Teatro Comunale in Bologna, the Teatro alla Scala in Milan, the Teatro San Carlo in Naples, the Metropolitan Opera House in New York and, as an indispensable tribute to the city of Milano, its Teatro alla Scala. These are the great protagonists of the solo show by David Leventi, hosted from 21st September at Visionnaire’s Wunderkammer in Milan.

The realization of the series from which the ten works in the exhibition are drawn has taken David Leventi five years: the entire project offers a journey through more than forty magnificent opera houses scattered over four continents.
Each theatre has been chosen for a particular feature that makes it unique: the Metropolitan for its unequalled size, the San Carlo for its record of longevity, the Palais Garnier for its frescoed ceiling by the visionary Marc Chagall, and its use as the setting for the famous Phantom of the Opera, La Scala for having hosted Verdi, Rossini and Bellini, and the Mariinsky for having seen the presence of Tchaikovsky, Mussorgsky and Rimsky Korsakov.
David Leventi’s survey not only highlights the magnificence of the decorations and the solemnity of the architecture, but also explores the historical function of these places.

The complete series of 40 theatres is presented in a volume entitled Opera, published by Damiani, and including an insightful foreword by Placido Domingo.

NeoCon. Spaces for the future

A decade with Moroso, Doshi Levien and Edward van Vliet