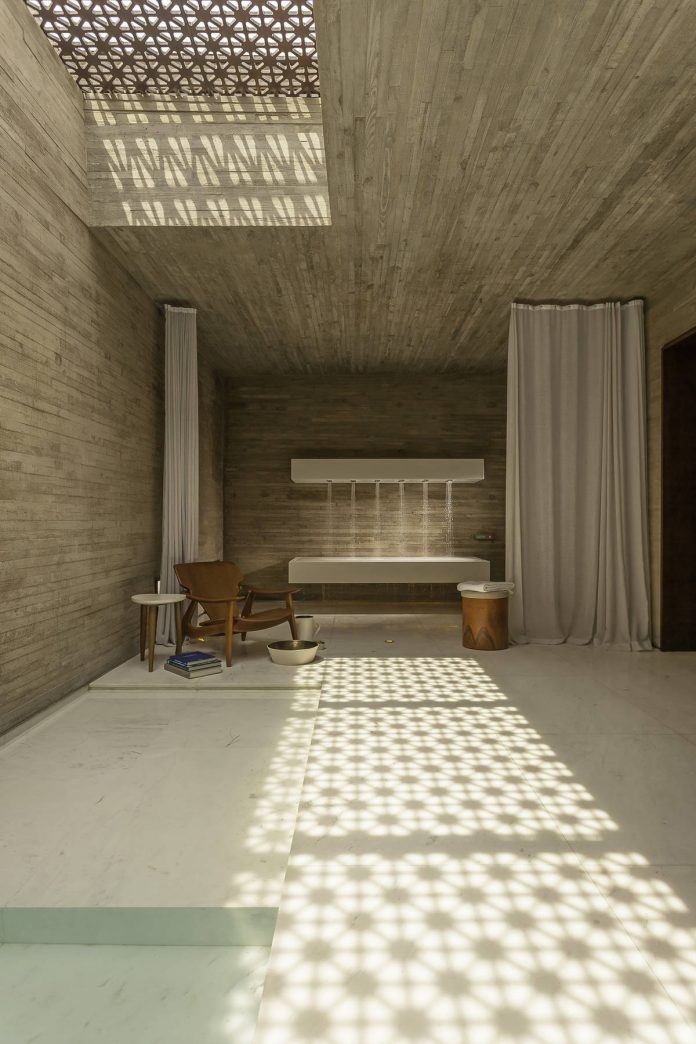 Upon entering the Aigai Spa, all the traffic, frenzy and noise of the Brazilian capital immediately melts away, leaving you enveloped by relaxation, water and nature. The project develops over two floors and twelve different internal courtyards, where water reigns supreme, where innovative and technological taps, fittings and showers have been used to create perfect interiors for relaxation. Dornbracht systems include the choreographies of Horizontal Shower, jets of Just Rain, Water Sheet and Water Bar with Vertical Shower, the RainSky E, shower, the ranges Deque, Lulu, Supernova, Meta.02 along with elements from the Water Modules series, such as the  Water Fall spout.

The architect Figueroa has also concentrated on light (and shadows), drawing inspiration from the arabesque decorations of Alhambra, Granada. The spa’s gratings, characterised by infinite inlays, similar to mashrabiya (linear gratings typical of the Arab world), are used as sliding roofs which can be extended and withdrawn to create fascinating plays on light and dark, juxtaposing their sheer immateriality with the nude, untreated cement selected for the entire project.

The Relax Lounge is the largest wellness area, followed by Feel, with its own vertical garden, and Dream in third place, with its bijoux library room. The spaces have been furnished with Patricia Urquiola pieces (such as Tropicalia Cocoon by Moroso and Mangas from Gan Rugs), Vitra furnishings (such as Suita Sofa by Antonio Citterio and the Slow Chair by Ronan & Erwan Bouroullec), with lighting by Lumini.
The My Spa part of the facility is available for hire by single guests or groups and features its own independent entrance, Hammam and reserved pool.

The British version of Caesar

Auralis Space, a house for light in Milan