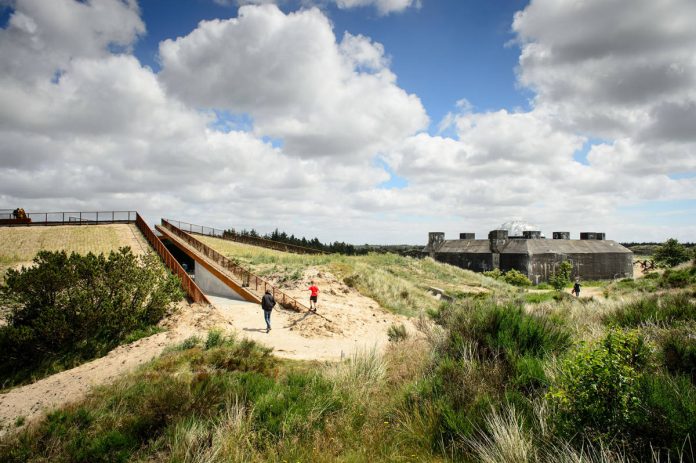 This gesture as delicate as it is innovative, was conceived by the Danish studio BIG- Bjarke Ingels Group, right next to one of the largest bunkers from the Second World War. The project aims to integrate with the landscape, almost disappearing into the terrain, while creating a stark contrast between its two neighbouring structures, opposite in terms of form, materials and intent, albeit linked by an underground tunnel. “The architecture of TIRPITZ is the antithesis of a bunker. The heavy, hermetic object is contrasted by the lightness and welcoming atmosphere distinguishing the museum. The tunnels are integrated into the dune like an open oasis on the sand, in stark contrast with the original fortress’ cement”, Bjarke Ingels explains.

The project develops over a 2800 sqm surface and is expected to attract 100,000 visitors per year. It presents itself with a central nucleus linked to four arms containing three museums (one pertaining to the bunker, one dedicated to amber and a historic one called a histolarium), along with an exhibition area. All four parts live independently from each other but are connected and form a complex unitary structure which assumes a precise geometric form from above. The entire structure excavated in the dune has been conceived in glass and steel. The Café is located on the top floor and the entrance is accessible via an uphill gangway. The foyer is located on the bottom floor, at the centre of the four tunnels,. with functional spaces (toilets, cloakroom and depots), for each of the four arms.

Hospitality and sharing in living color