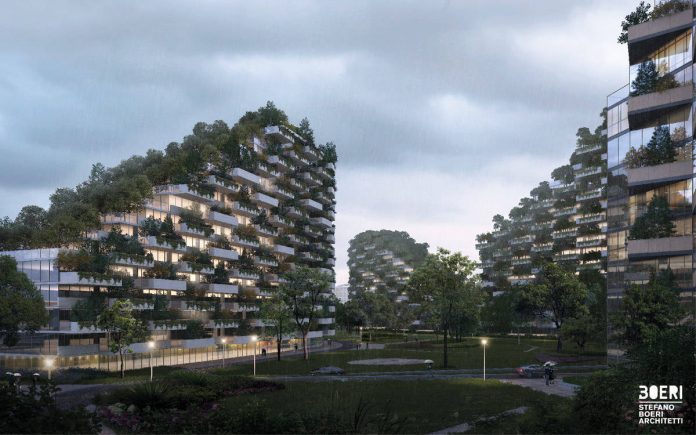 Offices, homes, schools, hospitals, hotels, all entirely covered in trees and plants. China’s first Forest City is set to become a reality, thanks to an ambitious project by Stefano Boeri Architetti, which continues its tireless search for a new generation of architecture as a model for urban settlements of the future around the world.

Liuzhou Forest City will arise along the banks of the Liujiang river, north of Liuzhou, in the southern province of Guangxi, on an area of approximately 175 hectares, destined to welcome around 30,000 inhabitants.

Thanks to the planting of 40,000 trees and approximately one million plants belonging to100 different species, the green city will be able to absorb over 10,000 tons of CO2 and 57 tons of fine particles per year, while generating approximately 900 tons of oxygen.

The positioning of plants, not only along streets, in parks and gardens, but also on building façades, will enable the city to contribute towards improving air quality and reducing average temperatures. The city will generate a sound barrier and increase the biodiversity of species living in the territory.

The Forest City will also be entirely self-sufficient in terms of energy, with the use of geothermal energy for the conditioning of interiors and widespread installation of solar panels on roofs to capture renewable energy.
Entirely cabled, the new green city will be linked to the city of Liuzhou by a high speed railway line, used by cars powered by an electric engine.

Commissioned by Liuzhou Municipality Urban Planning, the city undoubtedly constitutes a drastic change in direction in Chinese policies regarding the crucial theme of pollution in large cities, and climate change. Indeed this state-of-the-art urban settlement is the country’s first project to tackle the challenge of energy self-sufficiency, the use of renewable energies and the increase of biodiversity while substantially reducing atmospheric pollution, thanks to the multiplication of plant and biological surfaces in the urban area.

The furnishing sector expands…. along the silk road

Inspired by the past, to lead the future