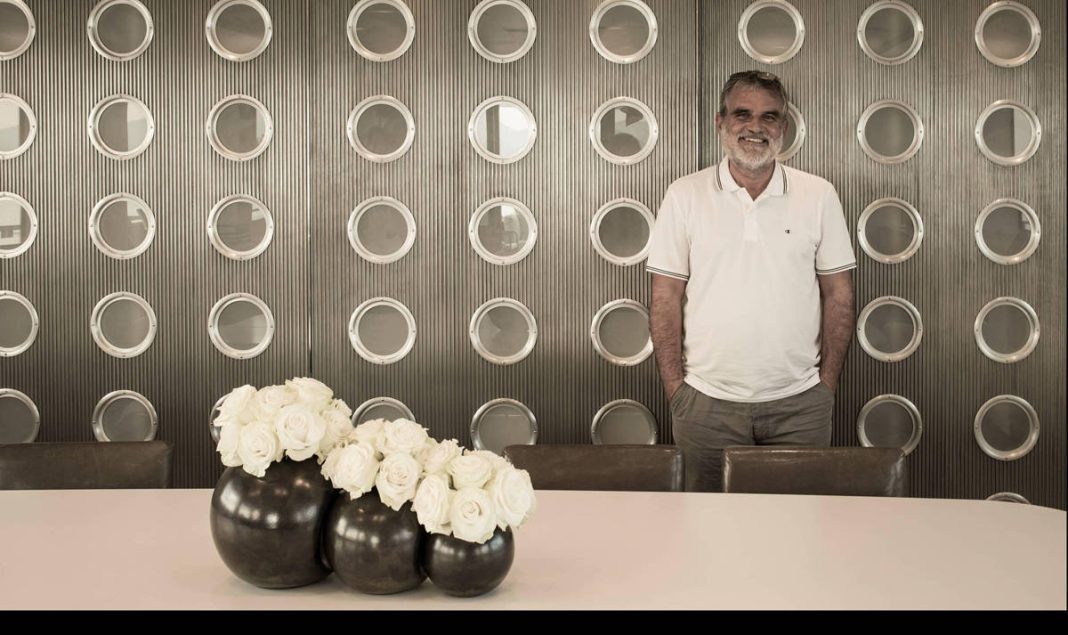 10 years ago, Sergio Buttiglieri joined Sanlorenzo shipyard and something changed. First of all, why did you choose to enter a different industry to the one that you were working in, especially given the financial crisis just around the corner?
In 2006, the year in which I joined the Sanlorenzo shipyard, the crisis had not yet hit the yacht world, a world that I was also unfamiliar with. At that point, I had been head of Driade’s production for over twenty years: it was a true aesthetic laboratory in progress, created by Enrico Astori in 1958. During those years, I got to know the most important Italian and international designers and the most influential industry critics, who appeared in texts related to the company’s communication, which was managed by Adelaide Acerbi. A fantastic mix that enriched me and that I continuously learned from.

How did you come to meet Massimo Perotti, CEO of Sanlorenzo?
To start a minor revolution, I needed to meet an entrepreneur with an open mind who had, in addition to limitless passion for his work, great intuition and determination to rapidly make ideas come true: I found this ideal entrepreneur in Massimo Perotti. By chance, on the day of our meeting, I had a copy of the Il Sole 24 Ore newspaper with me, in which a journalist had interviewed me about an ambitious chair project designed by Ron Arad for Driade, which I had found a way to create using a new molding technique that drew on the immense world of armature for furniture. The mix of aesthetics and engineering clearly left its mark on the man who would soon become my new boss. Massimo Perotti is not an interior design expert, but he knew that Driade was present in the best showrooms in the world and realized that I could be of use in creating the new Sanlorenzo, which had to stay true to its glorious history while continuously innovating, as Khris Bangle, BMW’s main car designer, had made us realize during one of his stimulating workshops with the management of Sanlorenzo. As soon as I joined Sanlorenzo, I was able to assemble a team of architects and interior designers and to make them appreciate the product quality that we had recommended to the ship owners, explaining to them who was behind the project and the history of the Sanlorenzo company. I banned the choice of brands that had made copies of products or had not paid royalties to designers. This continual training in the best of contemporary design paid off and we now have an unrivalled team.

Then came the time for decisions.
The trust relationship with the owners was immediate and as we gradually got to know each other, I considered possible proposals by new designers that could be added to modify our yachts. I understood the great responsibility that I had, since if my suggestions were unsuitable, it could lead to the loss of millions of euros. So the choice of a new, famous designer to introduce to yacht design was fundamental. It had to be someone who had never worked in this area, since this would allow them to better perceive the new possibilities of this particular language. It had to be a designer who was not radical, since this could be unsettling, but who was internationally recognized for the sobriety and sophistication of his contemporary-style creations. The choice fell on Rodolfo Dordoni, who I immediately introduced to Massimo Perotti. They got on well and Perotti decided to get him to design the interior of the first SL 100, a 31 meter planning yacht that was a huge success. Uncertainties that persisted in the company about this project, regarding its unconventional layout, unusual materials and decidedly metropolitan style that simultaneously abounded with layered memories of past Milan interiors, were also allayed. This success legitimized my work, allowing me to add further embellishments to create contemporary atmospheres punctuated with some tasteful additions of vintage furniture, a feature that has always been greatly appreciated by our ship owners who are sensitive to the balance of languages.

What were the new interior design parameters that you decided to establish as a solid basis at the time?
Simply awareness of the fact that any proposed interior should take into account seaworthiness and space optimization. Sanlorenzo refused to compromise on this subject. Our requirements involved furniture companies, especially outdoor furniture companies, making or adapting their products for our projects. I am convinced that the relationship with us further increased the quality of many companies’ products, elevating technical characteristics, materials and construction solutions in order to make their furniture suitable for the extreme environments in which they would be placed, such as the flybridge or the kitchen. In this regard, Paola Lenti, Roda, Boffi, Kettal and B&B all listened to us and their products are now even higher quality, partly due to our contribution.

What is the next step?
The next step is the further integration of interior design with contemporary art so that ‘Sanlorenzos’ increasingly become unique pieces with works made specifically for the interior of the boat. It is no coincidence that we have just successfully concluded an operation with Tornabuoni Arte in Miami during Art Basel, which we will repeat in May during the Biennale in Venice.

Are there some design companies that have particularly impressed you in terms of efficiency?
Yes, definitely Boffi. I was astonished by how little time it took for them to make the first marine kitchen for us, which features nautical details such as magnets and anti-rolls, as well as special materials and the necessary inspectable parts for the interior areas. The same thing happened when we adopted their K2 model designed by Norbert Wangen for our flybridges, a perfect machine with a sliding top that is always available and with a structure completely made from steel aluminum and teak, which is therefore salt-resistant. This project, which was undoubtedly aesthetically beautiful, confined that horrible fiberglass furniture, with its heavy lids that had to be blocked once opened to prevent them being dangerous, to oblivion.

What projects are you currently working on?
After working with Dordoni, I introduced, with the agreement of the owners, Antonio Citterio Patricia Viel and Partners and Piero Lissoni. Citterio and Viel, who were also first-timers when it came to nautical design, reinterpret, in a totally different way to Dordoni’s design and with immediate success, the interior of our 32-meter Sanlorenzo, the SD 112 semi-displacement motor-yacht. I have known Piero for many years and my approach had been gradual but determined: his first project is rapidly preparing to enter the water with an unprecedented design at Cannes in early September.