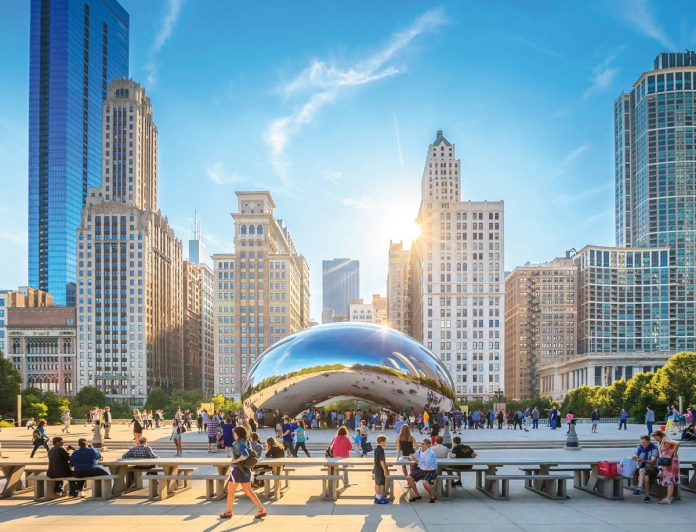 Your gaze is always drawn upwards. Buildings rise up, imposing and majestic, proud to be part of a true open-air museum; one after another they create a precise urban grid, exhibiting architectural quality that has set a global benchmark. It is no coincidence that Chicago was home to the first skyscraper: the Home Insurance Building designed by William le Baron Jenney in 1885. It was only ten floors high, but it was the first building of its kind to boast a steel structure.

Since that time, the city has been the stage of great building challenges by major 19th and 20th century architects: Daniel Burnham, Dankmar Adler, John Root and Louis Sullivan. Not to mention Frank Lloyd Wright and Ludwig Mies van der Rohe. Until the creation of the tallest skyscraper in the world in 1973, Willis Tower, which held the record until 1998 (now it is the eleventh tallest, according to the American rankings).

Strengthened by its past, in which the city was the country’s commercial center and logistical crossroads, Chicago still maintains its distinctive features, perfectly combining a leading role in the cultural (let’s not forget that it was the birthplace of the Blues), economic and industrial spheres. There is a deep-rooted connection between the city and the design world. This has given rise to one of the cult events in the global design calendar, NeoCon, which is now in its 49th edition. This is the home of industry professionals, where you can witness the latest developments related to the Workplace, Healthcare, Hospitality, Retail, Education and much more. The event comes to life inside the Merchandise Mart, one of the city’s largest buildings, which contains hundreds of international furniture showrooms between the 6th and 15th floors.

A space for art