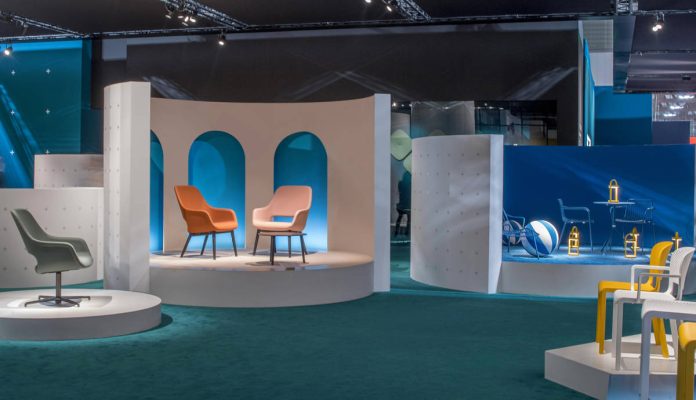 The brainchild of the Milan-based studio CalviBrambilla, here is the ample set Pedrali used to present itself to the world of design and beyond, at the latest edition of the Salone: Solid Geometry, a metaphor used by designers to pay homage to the company’s solidity.

A staggering seven new collections and four new models on display, cocooned in geometrically-shaped niches located along an exhibition route opened by a petrol blue coloured grille, an allusion to the virtual space of histograms used in architecture. The set also includes settings characterised by compositions of primary volumes which become spontaneous stages and essential scenographies, characterised by contrasting colours and lights, to welcome and promote the new collection, with their versatile and functional elements in wood, metal, plastic materials and upholstery.

The setting of Nym, the first seating collection in solid ash wood by the Cazzaniga Mandelli Pagliarulo trio is “British”, reminiscent of Windsor tradition seats, whereas those of Reva by Patrick Jouin revoke a California summer 60’s feel and Sunset alludes to the Mexican sun. The following elements are particularly worthy of mention as eloquent examples of the exclusive product ranges presented: the wireless outdoor lamp Giravolta, the Fox armchair, the ottoman and side table set Buddy, the lounge armchair Babila Comfort, as well as the sound-absorbing panel Snooze, the first project developed with the designer Marcello Ziliani.

Growth of the regional design community

Paleocapa 7 and Milano Aperta: the character of Milanese architecture in...