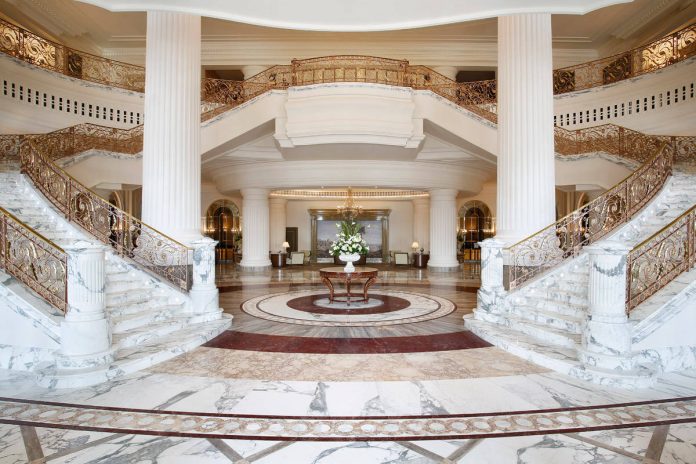 You can no longer see live shows by Jazz Age legends like Count Basie, Duke Ellington and Buddy Rich, who once performed in the ballroom on the top floor of the St. Regis in New York. But in the luxury chain’s new hotel, opened a few months ago in Dubai, guests will certainly be able to drink a Bloody Mary, the famous cocktail invented by Fernand Petiot in 1934 in the King Cole Bar – or its more recent variation Golden Mary, made with yellow tomato juice –, witness the sabrage ‘ritual’ for opening a bottle of champagne, or buy the perfume Caroline’s Four Hundred, invented by scent designer Carlos Huber of Arquiste and dedicated to a famous dance with 400 guests organized by the Astor family, the owners of the hotel.

The wealth of tradition, culture and savoir vivre that distinguishes the first St. Regis on Fifth Avenue can also be enjoyed by admirers at the new address in Al Habtoor, a multifunctional district under development in Dubai, designed by John R Harris and Partners with the operational supervision of the Khatib and Alami architectural firm and developed on the main urban arterial road, the Sheikh Zayed Road. Overlooking the Dubai Water Canal, the urban centre includes the construction of hotels that are part of the W Hotel and The Westin chains, as well the St. Regis, all managed by Starwood Hotels and Resorts Worldwide, along with three residential towers, numerous luxury commercial spaces, gardens, a promenade on the water and a theater for aquatic shows. Though located in a contemporary architectural complex, the hotel’s architecture and interior design – overseen by Bilkey Llinas – eclectically reflect the original Beaux Arts style planned by John Jacob Astor IV when, in 1904, he built the St. Regis, a fabulous reflection of the American Golden Age that preceded the crisis of the 1920s.

In Dubai, the lush gardens of the entrance, which conceal a heliport, serve as a ‘natural’ anteroom to a large lobby that evokes ancient opulence. Organized around and below a Hollywood-style ornamental staircase with two flights and a balustrade finely decorated with floral motifs, the space is punctuated with columns and decorated with snow-white stucco on the walls and ceilings and marble of every type arranged concentrically on the floor, introducing the guests to a different temporal and mental dimension, which defines the hotel’s six floors. In addition to the reception room, ten meeting rooms, eight bars and restaurants – including many inspired by Parisian style – two swimming pools, the Iridium spa, the hotel’s most impressive feature is undoubtedly its incredibly sophisticated rooms – 182 ranging from Deluxe to Grand Deluxe – and 52 suites, which feature different inspirations and sizes, from the Executive to the St. Regis, the Empire, the Caroline Astor Suite, the Grand Suite, the Royal Suite and the 913 sq m Signature Suite dedicated to Winston Churchill, which is characterized by European history-themed decor and extends over two floors at the top of the hotel. Another ornamental staircase is featured here, a helical staircase that leads to the central dome on the top floor and to the terrace with a pool and views of the gardens. Courtesy of Churchill Heritage Ltd, the suite contains a collection of 15 paintings, photographs and works of art from the Churchill archives. More recently, the smaller Bentley Suite was opened, designed by Wimberly Interiors and inspired by the Mulsanne, a homage to the craftsmanship and status-symbol renown of the car brand, which has always been a partner of the St. Regis. The sharp, aerodynamic shapes and use of leather as upholstery for much of the furniture are a clear reference to the features of the luxury car brand, an international ambassador of elegance and savoir faire, just like the St. Regis hotels.

Culture and heritage: Fantoni starts over

DC10 by Rossana lands in Shanghai