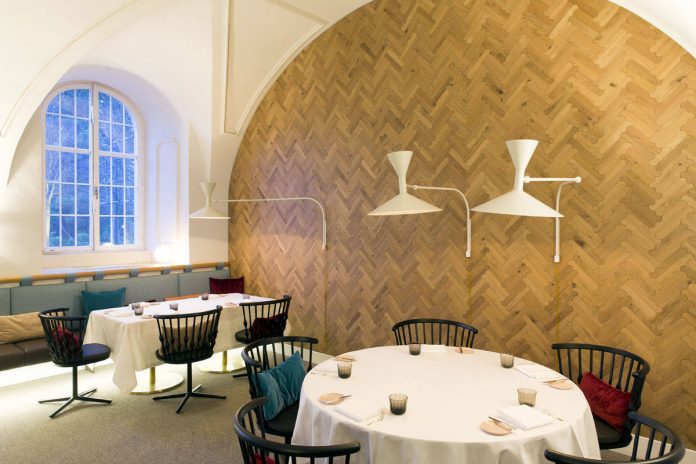 Following the culinary philosophy of three-Michelin-star chef Andreas Caminada, whose creations focus on the senses and high product quality, Patricia Urquiola transformed the old Swiss restaurant into a welcoming, homey environment with an emphasis on wood and brass.
Biscuit, from Listone Giordano’s Natural Genius line, has made its debut in the contract world, arranged in a vertical composition. Thus parquet, with rounded slats and a slightly ‘convex’ effect, rises from the floor to become a background, a picture, a frame, transforming the restaurant, which contains only 30 seats, into a true ‘nest’, which is in fact the meaning of the Romansh name ‘Igniv’.

The space features numerous combinations of parquet, ranging from inlay to mosaic, herringbone and regular formwork, redesigning the walls in a curious interplay of arrangements that testifies to the formal and expressive research of the design of the surfaces.

The only remnants of the old restaurant are the fireplace in the center of the room and the vaulted ceiling. The restaurant is characterized by warm colors: bordeaux, burgundy, brown and powder blue create an intimate atmosphere in this refuge set in the pristine Swiss mountains.