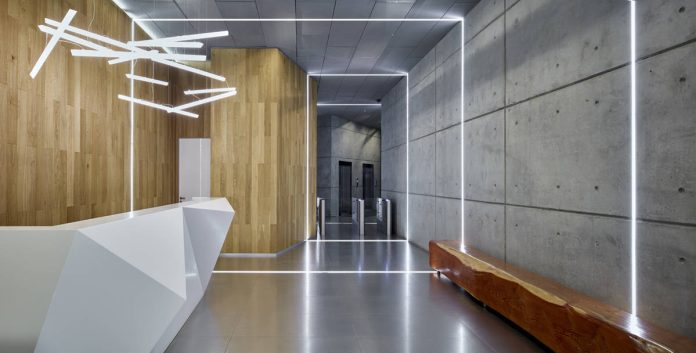 Clever Park stands in an area alongside the river Iset: a very large project that, when completed, will cover an area of 16 hectares.
The concept, developed by Boris Voskoboynikov and Maria Akhremenkova (the leading figures in Vox), arose from a precise initial briefing that requested a large area for offices while taking account of the fact that a major residential area would soon be added to the business complex and that the surrounding environment offered nature and landscape.

In devising this space, designers had first to find a non-aggressive architectural solution to separate the area dedicated to offices from the flow of visitors: it was decided to use the lower floor for dealings with clients while the upper floor was designed for company administration.
The second mission (although not in order of importance) was to succeed in conveying the investor’s values through the architecture.  And the aesthetic vision of the design was the keystone of its great success.

The is the logic underling the combination of minimalist textures with traditionally aggressive and hard construction and finishing materials, such as cement, glass and steel.
The walls of the offices are made of cement with square motifs breaking up the continuity of the material and a metal grill creates a special lighting effect. The varnished furnishings indicate and mark out the public areas and storage sites.
Reception greets visitors with a desk “sculpted” in Corian, the first, clear sign of the modernist tone of the entire construction.

In Clever Park, architecture and interiors merge in a modern notion of designing the working environment, with business spaces and areas for networking and relaxation.
Another of the most significant features of this project is the choice of technologies for sustainable development (a very topical issue in the region of the Urals) and the use of construction materials produced from local raw materials.   Numerous solutions are designed to save energy.
The result is a miniature “grande quartière”, almost a district in the modern sense of the word, that marks the territory with its own uniqueness and, at the same time, contaminates its surroundings.

Vox Architects has succeeded in its mission to create a uniform image of the area, giving “urban” value to a place mainly dedicated to the commercial world, integrating the architecture and interiors of the constructions with the surrounding nature and creating a development in harmony with the territory. Vox Architects – one of the most renowned design studios in Russia – also designed the headquarters of Leo Burnet and Zenith Optimedia and created interior designs for the private spaces and offices.

The outstanding technology of Solari in Ducasse’s restaurant