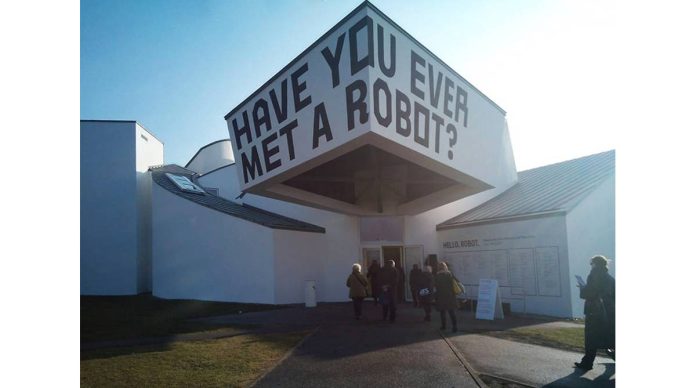 Have you ever met a robot? This is the phrase that decorates the entrance to the magnificent Vitra Design Musem designed by Frank O. Gehry in Weil an Rein, in Germany, a headline designed to welcome visitors inside the “Hello, Robot. Design between Human and Machine” exhibition.

Opened since 10 February until 14 May 2017, the exhibition – the first of its kind – is an overview designed to analyze the current boom in robotics, which presents visitors with over 150 art and design objects, including robots for household, nursing and industrial use, as well as video games,  multimedia installations and film and literary examples.
During the press conference on 10 February, the curators of the exhibition (the result of a collaboration between various different museums) – Amelie Klein and Erika Pinner of the Vitra Design Museum, Thomas Geisler and  Marlies Wirth of MAK in Vienna and Fredo de Smet of Design Museum in Ghent – explained how the exhibition explores the world of robots in four different ways.

The first part is focused on enthusiasm about artificial man and centres around popular culture and how it has influenced our perception of robots. The second part is focused on industry and the business world, in which robots continue to be seen, even today, as a threat to workers that could completely replace them in every regard. This area presents classic industry robots and an installation by the RobotLab group. The third part of the exhibition sheds light on how new robotic technology has become an integral part of daily life, as an “assistant” in housework, for the sick and elderly, or as a virtual companion.

The fourth part explores the fusion between man and robot, which is brought about when we live in “adaptive buildings”, when we move around in a smart city or in smart sensor systems. Elytra Filament Pavilion outdoor installation is much closer to art than robotics: a sort of canopy created according to bionic principles and a striking example of the growing influence of robotics on architecture. The pavilion was created by a group at the University of Stuttgart, which includes Achim Menges, who has been exhibited at the Victoria & Albert Museum in London.

The Olympics of Design