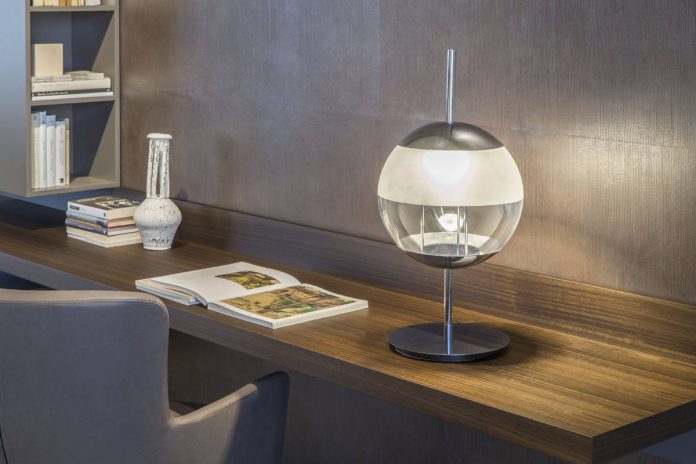 Minimalism is the creative inspiration for the new 2017 Nahoor collection and its geometric simplicity and formal rigour. Monolithic elements such as spheres and cubes come together in open structures and extreme serial sequences, with plays on verticality and horizontality, between weight and gravity.
The sculptural result of these lighting creations is a reflection on basic construction components, offering new interpretations of the relationship between form and matter.

In the words of its creator, the proprietor of the William Pianta brand, Christie is a “sphere suspended on a vertical axis, which appears to define the space of surrounding light along metaphysical lines”. Available in table, floor and suspended versions (the latter two models are also offered in two-sphere forms), the Christie lamp features a metal structure and a Murano glass sphere with two finishes (transparent and frosted). Cognac and Bordeaux colours are also available.

Circular forms return in Glamorama, a lamp with a “refined psychedelic effect resulting from a structural sequence of discs in polished chrome”.
The Blinky table lamp opts instead for elementary, more rigorous geometrical forms (in two 40 and 60 cm versions), “also inspired by a colour project to respond to the natural state of the raw materials used”. Ebony is the star of the show here.

William Pianta translates the same concept – variations on pure and simple forms – to exterior lighting solutions. This is the basis for Clay – a minimalist structure with reduced volume, alternating between full an empty – and for Jasper, an architectural outdoor light, brought to life in its floor version by a concrete base.

The illuminated dynamism of Preciosa

Unveiling of the Kartell 500

Technology at the service of light