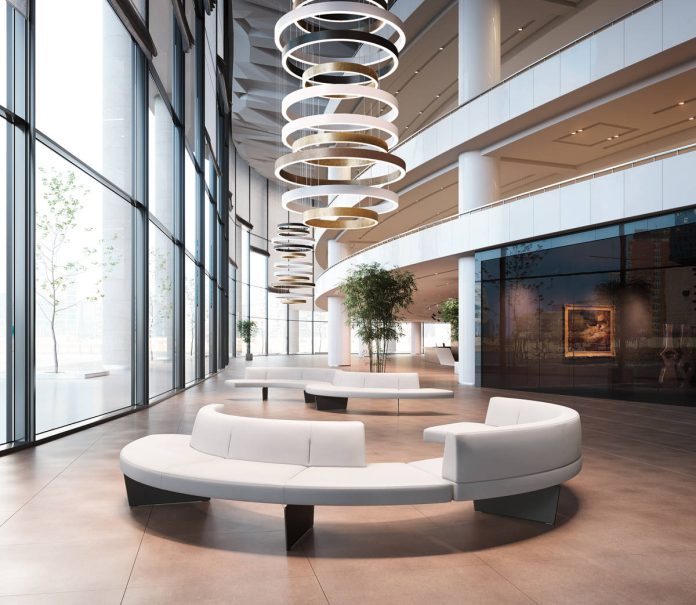 The large-scale spaces that characterize the contemporary architecture of public buildings and corporate headquarters have necessitated the design and development of seat systems suitable to collective or public settings such as conference centres, museums, hotels, airports, offices and libraries. Environments in which it is necessary to create a coherent identity of forms and colors for the institution or company, to make the spaces liveable, functional and recognizable and to put the people who frequent them at ease. Comfort, security, privacy and aesthetics are thus priorities, in addition to the simplicity of aggregation and the possibility of replicating and multiplying the various configurations to the extent that the space permits.

Informal, modular, endlessly repeatable and reconfigurable in ‘constellations’ of furniture, the systems presented in recent years have been continuously updated and improved to adapt to the needs of customers, designers and users. Such as Area Radius by Lammhults, designed by Anya Sebton as an extension of the Area seating program proposed by the Swedish firm back in 2009. The seven existing modules, which feature single seats, central elements, on the corner, on the left and right, are joined by two sets of curved padded furniture, with a concave or convex shape, to create virtually infinite furnishing configurations. Round or straight, with high (133 cm) or low (83 cm) backrests, with small tables or poufs, they all feature the same silhouette, with a diagonal design and informal, graphic character. Modules can be assembled thanks to Quicklink, a non-directional patented connection system that uses magnets integrated in the base.

Another functional update was presented at Orgatec 2016 in the Scope series of upholstered furniture, designed by Uwe Fischer, by German firm COR, in which every element can be used individually or in different combinations. The attachment system has been redesigned, simplified and strengthened with the small table and container element, which can now serve as a seat with surfaces featuring a dust-finish that are more resistant to wear. The backrest, which has an integrated lumber support, can be raised, thanks to two additional modules (from 70 to 113 and 141 cm), available in a vast range of colors.

Foster 512 is the new modular program of seats for public places presented in Cologne by Walter Knoll, which continues the collaboration with Foster + Partners. Used as a bench or sofa with a backrest, with a curved or straight shape, with or without armrests, it consists of a base element in various sizes characterized by a rigorous, iconic design and great attention to detail, from the perfect combination of vertical and horizontal to the slim, blade-shaped legs and stitching on the leather upholstery.