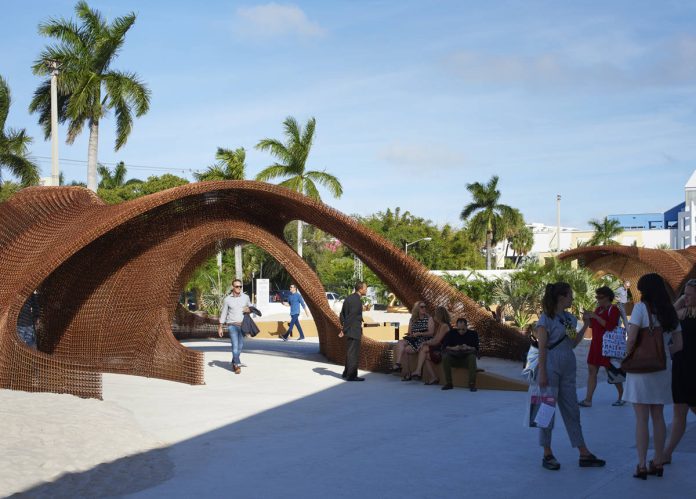 Five days in which the city takes on a whole new meaning. Miami Beach is transformed into an open-air museum, an ‘urban’ gallery perfectly integrated with its Art Decò architecture, large green spaces and endless expanses of beach.
The driving force behind this transformation is the Design Miami/ event, which catalyses the most exclusive global design in the city from 30 November to 3 December, coinciding with its sister event Art Basel Miami Beach, the leading event in the field of modern and contemporary art.
Against this backdrop, where multiple expressions of creativity co-exist, high-level design has won a stage of its own, fostered by the eclecticism of Miami, which is increasingly proving to be a fertile ground for art and culture, as well as for business and enterprises.

35 galleries are exhibiting at this 12th edition of Design Miami/. There are many new developments this year, from the new exhibition layout at the Miami Beach Convention Center to the new contributors and partnerships that enrich the exhibition programme represented by international galleries.
Among these are the installations by Design Curio, a platform that offers designers, curators, innovators and gallery owners the opportunity to create original display areas related to the theme of technological and scientific research and to 20th and 21st century craftsmanship.

The numerous collaborations with international brands are worth noting, in particular Audi, star of The extra hour by LEGO, an installation inspired by the Audi RS 7; and Dean & DeLuca, the legendary New York gourmet market, which – in collaboration with architect Ole Scheeren – presents Stage, a prototype of an innovative retail concept.
Fendi returns to enliven the scene with a new creative collaboration designed by Cristina Celestino, while Louis Vuitton makes its debut at Design Miami/, simultaneously exhibiting two new pieces from the Objets Nomades collection.
Meanwhile, the L’Eden installation by Perrier-Jouët is a celebration of nature and design, which conveys a sense of the beauty and wonder of nature in an immersive brand experience.

The design of the interior of Natuzzi’s flagship store in the city – 3818 North Miami Avenue – is equally experiential: a new set-up in which the iconic Re-vive Natuzzi armchair dialogues with the Intro installation, designed by Fabio Novembre and produced by the company for the XXI Milan Triennial for the Stanze. Altre filosofie dell’abitare (Rooms. Other philosophies of living) exhibition.

Last but not least, the Panerai Design Miami/ Visionary Award, presented this year to SHoP Architects in New York for the Flotsam & Jetsam project (which will remain permanently installed after the fair): a sinuous and enveloping structure made with 3D printing, which evokes Miami’s romantic past and innovative future.