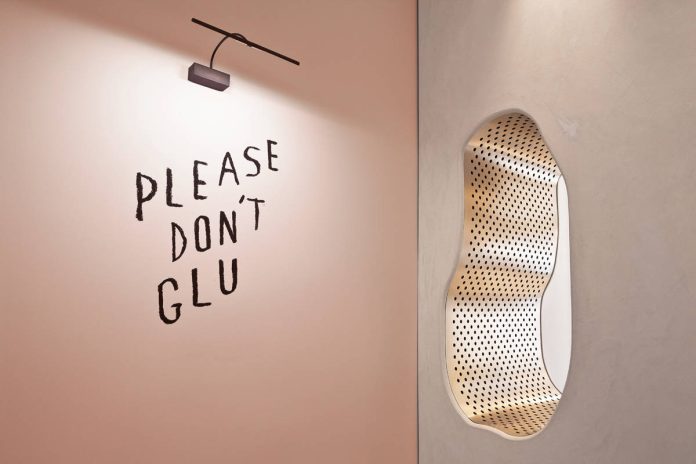 Intimate and inviting, contemporary and evocative. Different concepts come together with striking balance at the new Noglu, the chain’s third location in Paris.
Located at 69 Rue de Grenelle in the seventh arrondissement, Noglu is appropriately placed in an area renowned for an array food shops selling the best French cuisine has to offer.

It’s a must-visit address for lovers of fine patisserie, especially if you’re looking for gluten-free treats. Noglu is an entrepreneurial/gastronomic venture launched by Frédérique Jules – himself gluten intolerant – in 2012, with the empire now boasting three bakeries/restaurants in Paris and one on Madison Avenue in New York, serving up gluten-free fayre as sophisticated as the design of the cafes themselves.

The new Noglu – opened just a few days before EquipHotel showcases the best in the restaurant and hospitality industries – was designed by Mathieu Lehanneur, whose job it was to bring the interior of the café to life.
The ethics at the heart of the business (the name of which, Noglu – No Gluten, speaks volumes of the company ethos), are reflected in the interior design, which looks to portray a sense of purity and authenticity by using natural materials such as marble and quartz for the tables and steel for the seats, by Magis. The overall effect is sweetened by the softness and warmth of the accessories used, such as grey velvet cushions by LeLièvre and sleek lighting including the Cloudy ceiling light – designed by Lehanneur himself – and custom lamps by Charlotte Perriand.

The space is divided up into two main areas: the entrance space, where the counter is located, and the back room with its powder pink walls. Visitors access this more intimate area by passing through a large, wavy opening in the stone wall, which is inspired by the entrance to a cave. «We are primitive beings who have become civilised – explains Lehanneur – The stone wall is a nod to our cave-dwelling origins and reminds us that we’re not all that distant from them when we ask ourselves where we come from and what we’ve become».

A smaller opening to the side underpins that concept, bringing dynamism to the space, while character is provided by the slogans “Please don’t glu” and “Keep the gluten away”.

Snaidero reinforces its activity in Russia