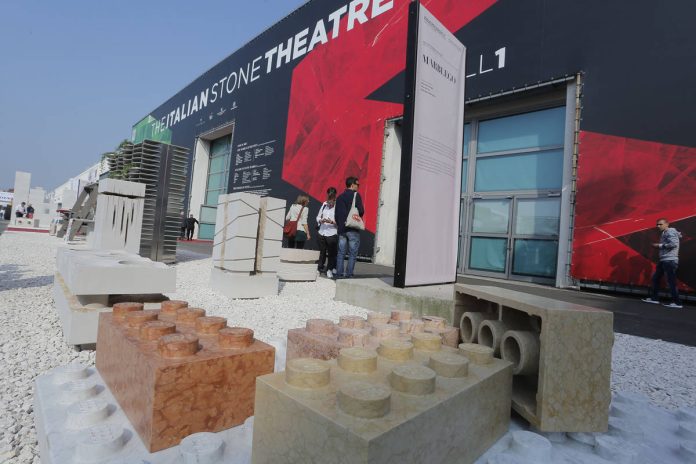 It exceeded every prediction and all the figures recorded at the previous editions, an unprecedented success that confirms Fiera di Verona’s position as a centre for international exchange in the stone industry. Marmomacc 2016 ends with a positive result that is part of a trend of constant, progressive growth.
“The 51st edition – said Maurizio Danese, President of Veronafiere – set new records, starting off with +10% of exhibitors for a total of more than 1,650 companies from 53 countries, and 67,000 specialist operators arriving from 146 countries. The show covers the entire value chain, combining products, machinery and culture in a unique event with a strong history that continues to evolve, as evidenced by the new Marmo+Mac brand summarising our identity while equally looking to the future.”

The success of the event, held from 28 September to 1 October, was already apparent before the gates were opened: the 80,000 sq m fair district, divided into 12 pavilions and various outdoor areas, was completely sold-out.
However, the increase in foreign visitors (+ 5%), though greatly desired and appreciated, was unexpected, accounting for over 60% of total attendance.
“We achieved marvellous confirmation from markets such as the United States, Germany and Spain, not to mention the astonishing 45% increase for Chinese operators and an equally significant increase of 11% from Great Britain.”
Attendance figures also include more than 300 new international top-buyers and architects selected as members of official trade delegations arriving from 32 countries, with debuts for Nigeria and Mozambique. This is thanks to Veronafiere's continuous investment in incoming activities, in collaboration with the Ministry of Economic Development, ICE-Italian Trade Agency, Confindustria Marmomacchine and, for the first time, the Veneto Region, through Veneto Promozione.

And it is not only the figures that are remarkable. Equally impressive was the vast array of installations, events and shows devoted to design and training that accompanied the fair.
"The Italian Stone Theatre" – a Hall set up with the contribution of the special Made in Promotion Plan – outlined the interaction of stone, design and technology, while the International Stone Summit saw the main worldwide trade associations take stock of the natural stone sector, its future development and the relationship with the ceramic industry.
Marmomacc 2016 also staged two events resulting from new partnerships with Architectural Record and Archmarathon.
All the more, the stone installations highlighted by Marmomacc & the City in the historic centre of Verona will remain on show for the whole of October.

The 52nd edition of Marmo+Macc is scheduled at VeronaFiere 24-27 September 2017.

IFDM opts for a new look