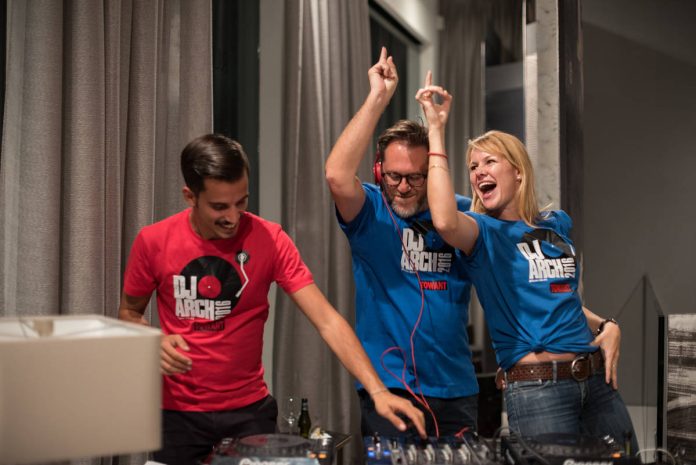 DJ Arch Night was held last week in the heart of fashionable Milan, amidst the fervor of Fashion Week. Now in its third edition, the event helped to liven up the already vibrant atmosphere of the Milan scene. The city’s interior showrooms presented an intense, successful combination of music and design.
The stars of the event had an unusual role: for one evening, 30 architects expressed their creativity through music, presenting their “sound projects” in ten international flagship stores.
These exclusive “sound designers” composed a special playlist, mixed live over the course of the evening with the support of a professional DJ. Every showroom featured three architectural firms at the deck.

The musical journey began on Corso Monforte, at the Alias store, where Genius Loci Architettura, RDM’S Studio Edem Seker and Wip Architetti kicked off the dancing. In Via Durini, Axor hosted Baldessari e Baldessari, Nomade Architettura&Interior Design and One Works.
The next stop was Casalgrande Padana and Lualdi, in Foro Buonaparte, where 23 Bassi, AIM Studio and LMA Architettura took turns at the deck.
Next up were the Design to Users, Migliore+Servetto and Nauta Yachts firms, which enlivened the Design Elementi and Modula showroom in Via Lazzaretto.

The initiative reached Via Savona, involving Elitis, which collaborated with LAI Studio, M2 Atelier and Marco Bonelli for the evening’s great success. Meanwhile, at MDF Italia, in Via Crocefisso (at the corner of Via della Chiusa), Marco Piva, followed by architects from Caberlon Caroppi and Progetto CMR, unexpectedly proved to be an amazing DJ, livening up a familiar and warm social atmosphere.
Minotti Cucine hosted an outstanding trio: Bartolomeo Fernandez, Longo Palmarini and Peter Pichler caught the attention of Via Larga. And the stars of the Fritz Hansen store in Piazza San Simpliciano were no less remarkable, featuring 967 Arch, Chapman Taylor and Design International as partners at the DJ set.
In Via Fatebenefratelli, Rubelli and its sound designers – the GBPA, MYGG and Matteo Nunziati firms – offered a blaze of sounds and colours.
Last but not least, Sedus at Magan Pars in Via Tortona presented its sound project signed by GaS Studio, Revalue and Unispace.

With music and design, stars and design projects, the initiative offered a completely new approach and vision of the industry that was at once accessible, fun, engaging and open to new collaborations: exactly how the world of creativity should be.

Towant was responsible for creating the event, a public relations agency in the architecture and design industry, which is not new to this kind of event. Among others, it has organized the ArchiChefNights, DesignLeague, BeachDesign and Design Sail.

The 10 opportunities for inspiration at work