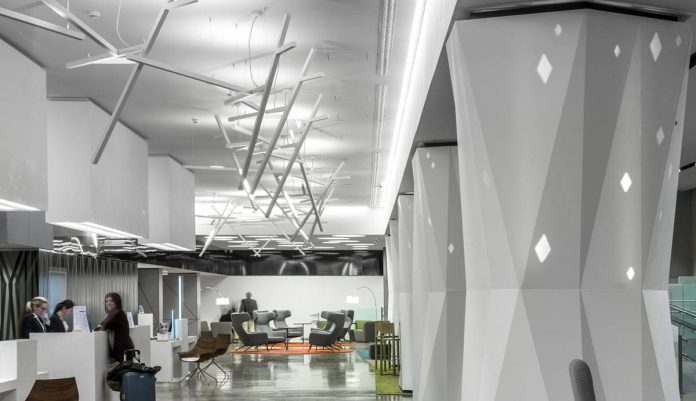 “Introducing nature into the hotel” was the premise of International Hospitality Projects (IHP) for the fulfillment of this incredible interior design project. The changes in how the space is arranged and the use of next-generation materials like HI-MACS® have transformed the renovated Novotel Madrid Center into a model for contemporary design.

The recently inaugurated four-star Novotel Madrid Center is located in one of the most central, bestknown parts of Madrid, adjacent to the elegant Salamanca district and very close to the emblematic El Retiro Park.
This is the largest Novotel in the world, with 790 rooms and almost 7,000 m2 (75,000 sq ft) of common areas, of which more than 2,500 m2 (27,000 sq ft) are rooms  for conferences and meetings.

The remodel covered the building’s entire interior space – lobby, bar / restaurant, conference rooms and hotel rooms – as well as the new and impressive foyer, inspired by the theme of nature because of the hotel’s location near Madrid’s greenbelt. According to Paolo Mauri, the project’s designer, “We needed to be able to create something that would have a real impact, from a visual and esthetic point of view.”

An architectural plaza invites guests into the hotel, through a forest of trees made of steel, topped with a foliage of green crystal. This bright and airy structure with great visual impact covers the majority of the plaza.
The view of the main lobby is made of six large HIMACS ® pillars with backlit rhomboid patterns that portray a geometric abstraction of the trunks of the trees and their leaves. These epic structures in the form of asymmetrical prisms are the focal point of the lobby and make up the backbone of the hotel.

With the aim of giving the hotel an updated, contemporary image, three straight structures with diffuse underlighting were chosen for the majestic reception desks, made even more attractive by the presence of three large “smokestacks” hanging from the ceiling above and illuminated at the base, spreading warmth throughout the reception area. All of these elements are made of HI-MACS®, in Alpine White, in contrast to the back part of the desk, which is printed crystal.

A new side entrance for groups was also created, where a large trapezoidal structure lit from within, likewise produced in acrylic stone, delimits the space between the staircase and the ramp.

On the same main floor are the bar, another spectacular area in the Novotel Madrid Center, and the restaurant. The actual bar is six meters (20 feet) long, in a single steel piece that marks the edge of the lobby. The front of the bar, covered in backlit Alpine White HI-MACS®, is changeable and combined with the large video wall, lets the hotel vary its atmosphere

“HI-MACS® gave us the ability to create impactful elements – asserts Paolo Mauri – while still being a material that is neutral, long-lasting and easy to maintain – all of which were characteristics that the client required”.

A lobby for Van Gogh