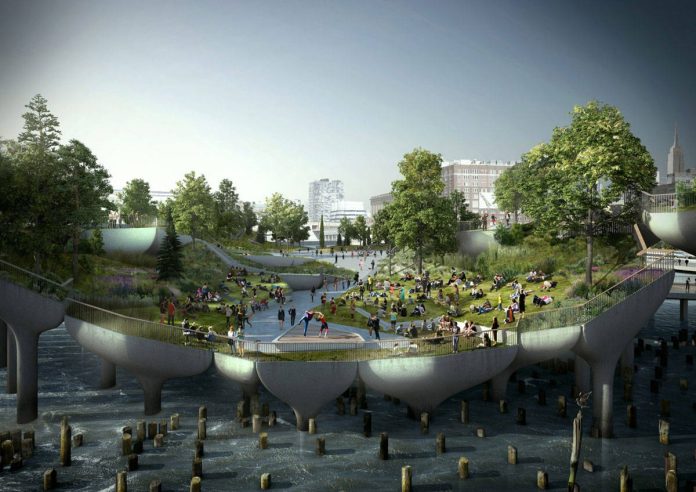 Hudson River Park is currently the largest project for a green urban area in the process of design and development in Manhattan – a 6 kilometer linear park overlooking the Hudson River. One of the various developments planned for the project is Pier55, designed by the British firm Heatherwick, which, following a legal dispute, last month received the approval of the US Army Corps of Engineers to begin construction, planned for the coming months. Financed by the private, non-profit organization Pier 55 Inc., founded by Barry Dillon and Diane von Furstenberg, and designed together with the landscape architectural firm Mathews Nielsen, the park will extend for about a hectare near the Chelsea area on a platform in the water that will replace the deteriorated Pier 54. Set on an artificial island made up of stacks shaped like mushrooms, the park is connected to the riverside esplanade by two walkways and has a varied, undulating shape containing different types of vegetation, inspired by an Arcadian landscape, and a circuit of paths for visitors to explore. The value and potential of green infrastructure are strengthened by the presence of an open-air amphitheater for 700 people that transforms Pier55 into a place dedicated to culture as well as nature. After its completion, planned for 2019, the audience will be able to enjoy shows and music performances, dance and theatre in a beautiful natural setting.