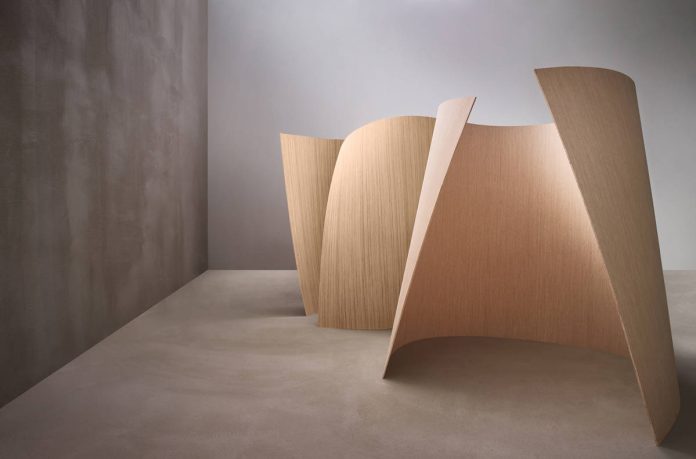 Alpi introduces itself to the public of the Milan Design Week through the opening of the new showroom in via Solferino – launched on April 12 – and sided by a new partner; Piero Lissoni has become the Art Director since June 2015, renowing the brand image with a typical, essential style. Company Profile is a sophisticated publication enhanced by striking black and white photographs which efficiently reflect the new brand cover.

The new collections by Pero Lissoni, Xilo 2.0 and Tarsie, propose creative solution that involve, firstly veneers that gets its force from the perfect intensity of nature, for which Lissoni, with the typical lightness of his creative language, has selected a balanced chromatic range of 4 colors in a sequence, from pale to dark.

The second creation, Tarsie is a representation of three geometric motifs from the wood working tradition, reproduced through inlay-effect printing on the variations of Xilo 2.0: Tarsie 1 with a herringbone motif, combines the various hues of the collection in an only apparently irregular pattern; Tarsie 2 stands out for its delicate two-tone diamond motif; Tarsie 3, a classic running pattern based on the image of industrial woodflooring, mixes the different tones of Xilo 2.0.

Alpi enlarges its inclination towards the project to products by Fratelli Campana and Front, which share the attention on decoration.

The delicate creative touch of Front finds expression in the original Drapery Wood and Grid Wood, one of the protagonist for the fifth edition of The Wallpaper* Hotel at FuoriSalone 2016.

The amazing wonders of the Amazon have inspired the Campana brothers to create the textures of the new Alpi Piaçava – filament-like – and Alpi Pirarucu veneers, living fossils with a particular formation of the scales, used by local craftsmen, which the designers have reproduced in this new texture.

The choice of forceful interaction with the world of design is a return to Alpi’s roots: the same passion that made the history of the brand starting in the 1980s, thanks to the intuition of Vittorio Alpi, now at the helm of the company, involving prestigious collaborations with outstanding names in Italian design like, among others, Aldo Cibic, Dino Gavina, Pierluigi Ghianda, Angelo Mangiarotti, Alessandro Mendini and Ettore Sottsass.