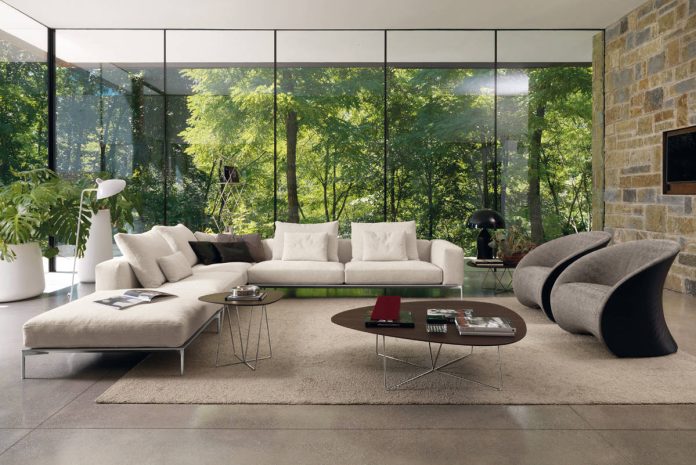 The Euromobil Group has created a space bursting with the biggest names in the business for the most important event of the year: Milan Furniture Fair in April. The team features the likes of Roberto Gobbo, Jai Jalan, Marco Piva, Marc Sadler and Setsu & Shinobu Ito, all of whom are crammed into a 1000sq m exhibition space. Through the medium of their creations, the designers channel the brand’s philosophy into interior design products that ooze innovation and represent «the understanding of one’s time, using the best artisanal traditions to give life to design products that respond to modern lifestyles and the make-up of today’s societies». The words of Gaspare Lucchetta, who owns the Euromobil Group together with his brothers, seem to echo within the vast exhibition space at Milan Furniture Fair and are reflected in coherent furniture models: the expression of a Total Home Design concept. Comprising the project – which is characterised by a simple, elegant lifestyle vibe and accessible quality – are the group’s three brands: Désirée soft furniture, Zalf furniture and Euromobil kitchens. The three bounce off each other, borrowing certain elements and lending others in a continuous shared dialogue to create a complete furniture panorama. Marc Sadler has designed a range of Désirée products for the living room. These include the Savoye modular sofa, the informal padding of which is echoed by the structure and sleek, cylindrical feet. The same clean formality can be seen in the Koster chair: Sadler has drawn inspiration from the 1950s for its dynamic, deconstructed form, but makes it accessible enough to fit into any modern space designed for hospitality. The designer has also lent his hand to the Zalf brand with LZ, a modern, versatile bookcase composed of three different sections which can be arranged according to your own taste: up against a wall, back-to-back or in the middle of a room. For those who yearn from a more prevalent sense of comfort, the welcoming, curved forms of Jai Jalan’s Avì sofa and Soor armchair bring a new definition of the word relaxation to the soft furniture brand. Curved lines are also to be found in the models designed by Setsu & Shinobu Ito. The Shellon bedroom features a bed with a distinctive headboard adorned with irregular quilted folds, while the Wing armchair is built around a sleek, curvy structure with a wide, high backrest which envelops the whole in a soft embrace. Also scattered around the huge exhibition space are the Yori and Sabi side tables by the Japanese duo, the former inspired by bonsai trees and the latter by the geometry of opposites. Offsetting these pieces are larger-scale, architectural fittings, such as the Combi System cabinets, the Picà walk-in wardrobe and the Link bookcase, all of which are the product of extensive research into flexible furniture that aims to maximise the organisation and optimisation of any space. Moving from the living room and bedroom to that most convivial of spaces, the kitchen, Marco Piva and Roberto Gobbo showcase the fruit of their design work in the shape of Arte and Filò, with renovated finishes. Though the materials and aesthetics of the two creations speak entirely different languages, they find some common ground in their core goals: to create spaces orientated towards socialising, multi-functional settings which work in perfect synergy with the living room. But for the Euromobil Group, innovation is not just design, but also interaction and interchange between creative worlds. It means that their stand in Pavilion 10 takes on the allure of a gallery, in which furniture alternates with works of art and site-specific installations by the artist Jorrit Tornquist, one of the stand-out figures in the international art world due to his work in the field of visual arts and colourful installations in the urban landscape. «We’re making significant investments in the research and development of new products – explains Gaspare Lucchetta – with promotions, a more generalised culture of innovation and campaigns via the media and in sales points. For this reason, our forecasts for growth in 2016 are positive.» Indeed, just last year a considerable number of sales points were opened, with destinations including Vienna, Bucharest, Cairo, Johannesburg, Beirut, Riyadh, Guadalajara, Monterrey, Kuala Lumpur and Hanoi. They represent the Group’s key markets, alongside the United States, Mexico, Japan, India and Australia, among others. «For an Italian company in the furniture industry, it’s important to have recognition in your home country, but it’s also true that internationalisation is the future.»

The atelier of relaxation

Franke: the kitchen is no longer the same

Elementary Transformations by Cleaf, in a video