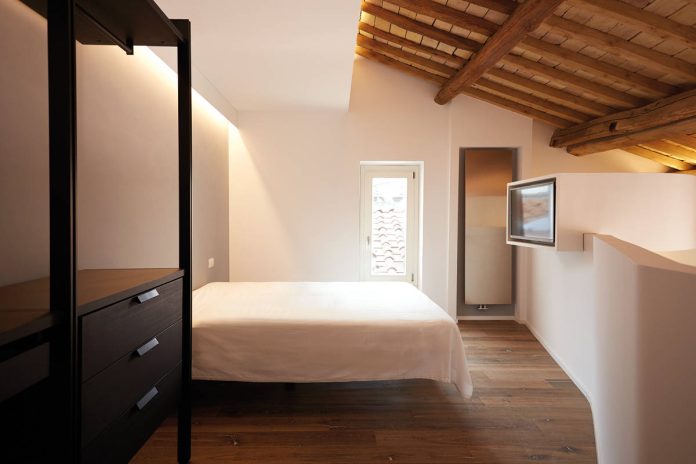 Three projects, three different locations across Italy, three architectural firms. They are united by their geometric spaces and minimalist interiors; rather than pursuing new trends, these firms seek to enrich what already exists. The contemporary balance between container and contained creates a concept of simple elegance and linear sobriety, capable of enhancing completely different settings. Let's be specific.

For the architect Alessandro De Sanctis, a process of subtraction aimed at the creation of sophisticated, calming contemporary settings guides his design process; indeed, this is precisely what we find in his Apostoli Loft project.The loft is on the top floor of a building constructed in Rome in 1644 by the architect Mattia de Rossi (a pupil of Bernini) and renovated in 1719 by the architect Alessandro Specchi.The first floor is open plan, with a living room, kitchen and bathroom, while the bedroom is located on the mezzanine floor. The apartment is enhanced by reflective glass used to create a sense of an expanded internal space. It is also illuminated by indirect artificial light “to permeate the interior with a peaceful atmosphere in contrast to the hustle and bustle of the modern-day city of Rome”, the architect explains. The spirit of the Roman Baroque period, which gave life to the original structure, was not excluded in the transformation carried out by the studio. On the contrary, it was amplified. It is no coincidence that the curved balustrade and suspended serpentine TV stand were inspired by the serpentine facade of the church of San Carlo alle Quattro Fontane, designed by Francesco Borromini in Rome. The living area is paved with slabs of opaque travertine marble, while the sofa and table are made of solid chestnut like the original roof beams.

For the apartment renovation project, la Casa di Andrea, Duearchitetti studio has focused on making the environment elegant and distinctive. The apartment is on the third floor of a late nineteenth century building, located in the city of Varese. The layout is governed by clear longitudinal and transverse axes that pass through the family-sized rooms, creating a proportionate space. We find echoes of the building’s history in the numerous doors – with two shutters and brass handles – interspersed through the apartment. The concrete floor, a continuous surface which extends throughout the space, complements the high wooden ceilings. Light enters through the wide, identical (except the veranda) windows arranged on three sides of the house, illuminating the soft vertical veins of the elm wood that distinguishes the entrance and is also present in the library and kitchen.

From Northern to Central to Southern Italy. Urban architecture gives way to the Mediterranean rural landscape, which dictates the design of Villa RP, an outpost in eastern Sicily. Overlooking the Ionian Sea on one side and Mount Etna on the other, this residence is located in Acireale, in the province of Catania, and was developed by Forte Architetti Studio as a variation on the theme of rural farmhouse architecture typical of the Mediterranean, characterized by its courtyard layout. The spectacular landscape influenced the construction of the building, which has a design that is structured around the surrounding views. “The commission specified very precise ideas about many aspects, mostly functional and relating to the setting,” the architects explain. “The central idea was to construct a building with the least possible visual impact on the site, harmonized with its surroundings, while at the same time having an intensely visual and vital relationship with the landscape. The briefing also had some clear directions from a functional point of view: the building had to be on a single level and the structure had to be made from concrete”. The compositional logic of the exterior corresponds to the choice of interior. “The complexity of the deliberately considered, articulate volumes had to also be evident inside. Expansions, contractions, visual penetrations and decompositions of pure volumes are meaningful features and aesthetic values that we wanted to express; consequently, the finishes and interior design choices were conceived to enhance essential features: minimalism in this sense pursues the aim of architecture, which is consistent with the entire project. The materials used – the concrete for the construction of continuous surfaces and white panels for the folds of the elevated volumes – make the most of our original idea.”

A new era for luxury in Dubai

Interactive architecture for the office of the future