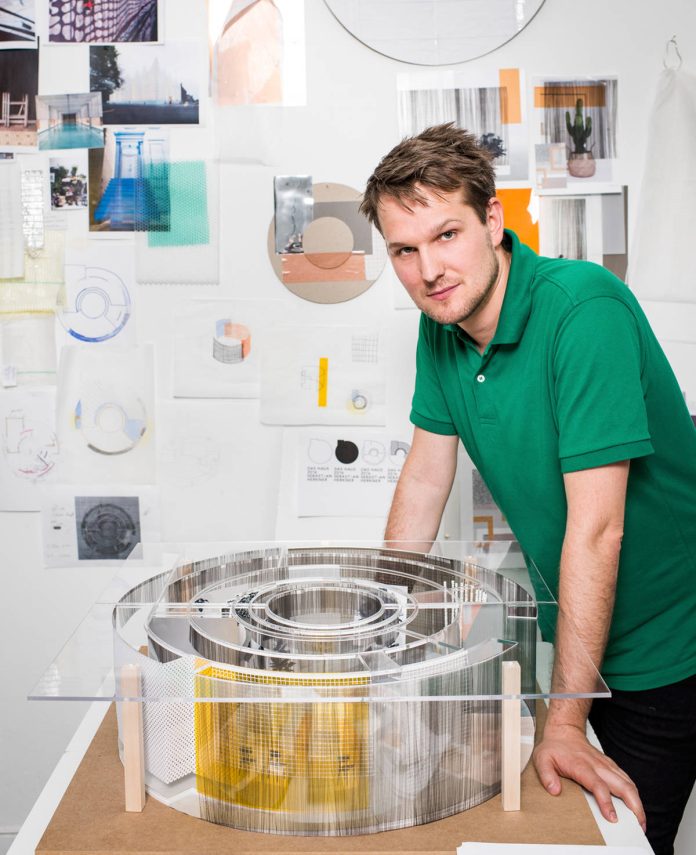 The Das Haus this year breaks with the tradition and the past. The designer Sebastian Herkner focused on a fluid design, more openness and freer living to offer a new interpretation of home concept.

He is the Guest of Honour of imm, chosen to sign the installation thatis represent the symbol of the Cologne event  (and that dominates the pavillion 2.2). But you have to forgotten the the compact installation from Neri&Hu at the last imm cologne or a low-tech place of calm created by the Danish designer Louise Campbell in 2014.The house according to the German designer is circular, more or less transparent and has almost no solid wall elements. The design is vaguely reminiscent of tent-like yurts or traditional ring architecture in rural China. Here, everyone is invited to look, enter, feel, communicate with others, gather impressions and insights. In fact the vision of the author wants to make a statement: a message against the tendency toward isolation. In his project, the center zone plays an important conceptual role:

it is the lively meeting point of the house and represents the core of the onion-like architecture revealed from the inside out. The circularity is interrupted only by the bedroom and the bathroom as semi-transparent spatial cube. A circumferential, narrow walkway forms the outer layer, the exterior of which is formed by a decorative facade of curtains, produced by the  German textiles manufacturer Nya Nordiska. The interior of the house is dominated by textiles and patterns, lighting and light. The furniture selected by Herkner for the interior design, in some cases designed by himself, in some cases favourite pieces designed by other designers, stand around freely in the room like on a stage. Among them, there are a lot of prototypes, exclusive designs and new products presented by Herkner's industry partners for the first time, including an outdoor collection from Dedon, a room divider from Rosenthal, a chair from Linteloo and lighting from Pulpo, will comfortably and attractively realise his idea of freer living. In the setting, we find also some bathroom produbts by Agape and the Ala collection by LaCividina.

Meta-Sensible, the style of our time

The new design studio by Nanimarquina