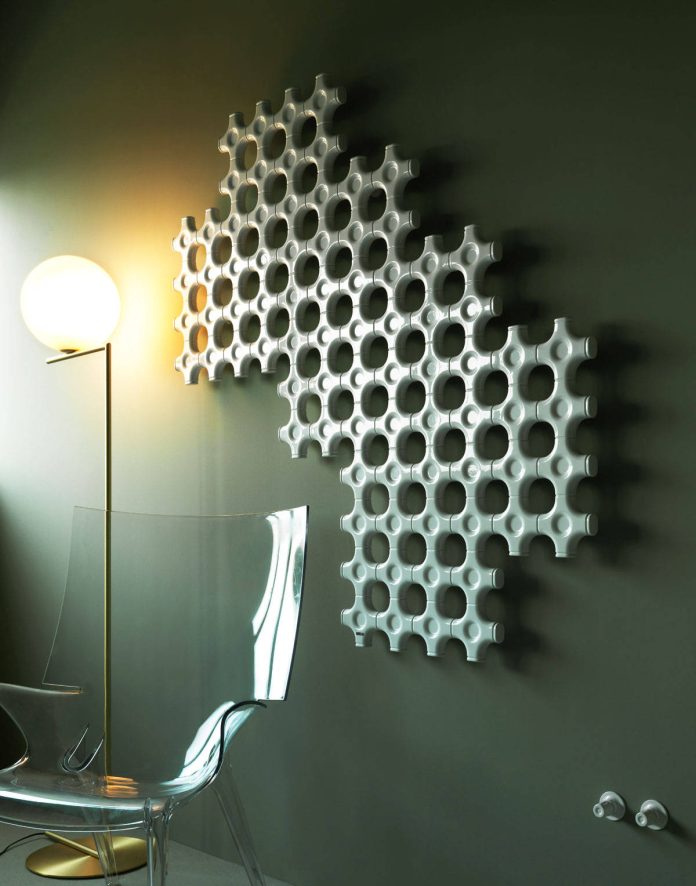 The simple measured design defines the friendly personality of add-On more as an element of ductile and multiple furnishing than as a component of a system meant for heating a room. In its aesthetic expression as a whole it seems a fun object-sculpture of a recreational appearance, almost a puzzle or a base for Lego bricks, meant to be mounted as a “do-it-yourself”.

In reality, add-On is a synthesis of design and technology; it is the fruit of a clear far-sighted planning concept signed by the Indian designer Satyendra Pakhalé for Tubes.

“I created a system based on a module developed in two directions thanks to four shaped sides that allow further modules to be added on ("add-On") thus creating an infinite radiator” says the designer.

The modular concept allows maximum flexibility in adaptation, expressed in a definite shape, square or rectangular, or in a free shape, based on the indications supplied by the company. Many are, therefore, the possibilities of composing it that leave space for heterogeneous creative solutions, fulfilling the heating requirements as well as the furnishing project.

add-On can characterise a wall, but, in a definite way, can also be part of a dividing element. This option is made possible thanks to a special support inside the wall that makes the radiator a really effective heating panel integrated into the internal structure, and represents one of the most innovative and unique aspects of the series.

The heart of the system is the 12×24 cm module, whose perfectioning required a few years of experimentation and underwent substantial modifications compared to the original prototype made of ceramic, a heating vehicle which is ideal for absorbing, maintaining and letting off heat in a constant manner. In the end, the project found an ally in aluminium that could better respond to the aims, guaranteeing fast heat exchange, the best precision in joining the modules and the lightness of the structure.

The high degree of innovation in design and in the technology of add-On – already recognised by the 2008 Red Dot Design Award – is confirmed by the curators of the Pompidou Centre in Paris who have selected add-On and inserted it into the permanent collection of the museum which is dedicated to art history from the 60s to present day.

The flexible projects of contemporary living