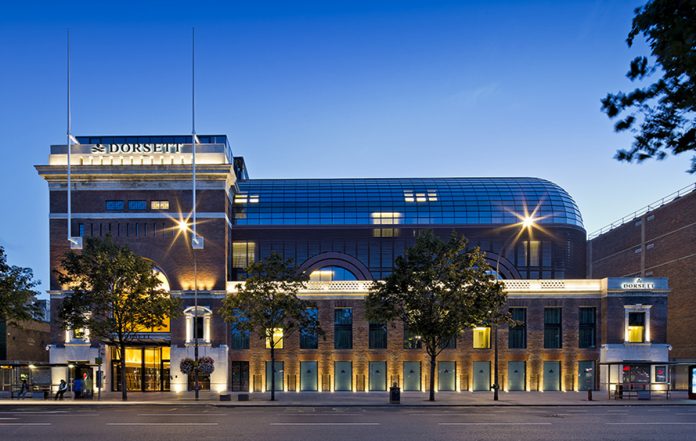 Flanagan Lawrence has converted the Shepherds Bush Pavilion into a four-star, 320 room hotel with associated leisure and retail facilities. Grade II listed and originally constructed as a cinema, the conversion and revitalisation of the building recognises and preserves the Pavilions external civic character by retaining the key architectural features of the building and recreating the original architectural volumes with more transparent materials to enclose the upper hotel rooms.

The original award-winning brick façade is retained with minor alterations to ensure natural light within the hotel rooms behind, including a new glazed roof which follows the curved profile of the original. The rear of the building, having little architectural merit, was replaced with a simplified interpretation of the main front façade using similar materials, however visible discernible from the retained façade.  The overall scheme is a balanced composition of old and new elements, both in the facades, but also in the contrast between the inside and outside.

The new interior architectural sequence is based on the hierarchy of space in the original design and begins with the triumphal arch, which has been formed as a quarter dome to mirror the form of the corners of the external roof. This leads into a lower foyer, arranged in a similar configuration to the original cinema foyer, including a reference to the original circular floor decoration.

The theme of the golden age of cinema is picked up in a series of art deco inspired curved roof vaults in the foyer space, with vertical circulation to the upper bedroom floors located in a similar position to the original circulation core at the west end of the ‘tower’. The atrium is the real surprise; opening off the foyer, it rises to the full height of the building to create an impressive focal point for the hotel.

Flanagan Lawrence have unlocked the future potential of Shepherd’s Bush Pavilion, complementing its form and reinforcing its original spirit. This solution achieves a careful balance between old and new, mooring the projects pivotal position in Shepherd’s Bush, a catalyst for the continuing regeneration of the area.