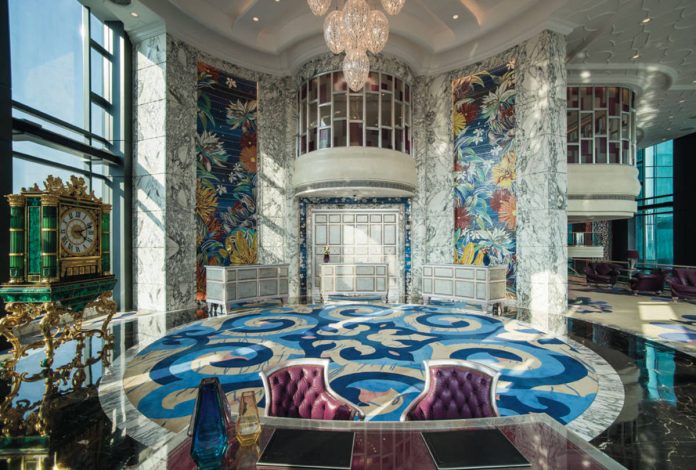 A lively, colourful expression of a new concept of luxury. The fresh brightness of the rooms and veritable rainbow of colours that enhances the refined splendour of The Reverie Saigon make it one of the most prestigious luxury hotels in the world and the only six-star hotel in Vietnam.
Situated in Ho Chi Minh City (commonly known as Saigon), the hotel stretches between the 27th and 39th floors of the cutting-edge Times Square Tower, the unrivalled height of which dominates the District 1 skyline in the heart of the city. Its panoramic windows provide stunning views of the legendary Dong Khoi Steet and Nguyen Hue Boulevard, allowing guests to reflect on Vietnam’s rich cultural heritage.

Just as Ho Chi Minh City is a marriage of the autochthonous, historic Vietnam – with its Chinese influences and echoes of colonial France – and the country’s recent opening towards the West, the new hotel represents a perfectly judged fusion of classic elements and contemporary splendour.
The hotel features 286 rooms divided into 12 categories, including 62 suites ranging between 63m2 and 313m2, three different restaurants capable of satisfying any taste (from exquisite Cantonese cuisine to the most refined French cooking and even the intense flavours of Italy) and the Long@Times Square drinks area built around a 48-metre bar which conjures up images of the hustle and bustle of the great cities. Completing the facilities at this truly iconic hotel are a luxury spa, fitness centre, swimming pool and a host of other features.

The interior design belies a pursuit of the utmost quality and manufacturing excellence, with the Italian spirit of the participating interior brands there for all to see: Colombo Stile, Giorgetti, Poltrona Frau, Provasi, B&B Italia and Visionnaire, not to mention Sicis and Venini.

These big names from the international interiors industry find themselves side by side in a melting pot of styles, materials and influences, teaming up in the design and furnishing of the sophisticated spaces.
The flurry of colours provided by the Sicis mosaics and gorgeous Murano glass artwork by Venini create an imaginative and painstakingly meticulous backdrop to this six-star theatre of style. Let’s take a look at the stars of the show.
Colombo Stile has created the main entrance (with a five-metre counter in malachite and Rocca crystal) and hall on the seventh floor, while also providing a series of corners and lounge areas throughout the rest of the building. Stand-out pieces include the huge five-metre sofa created for Michael Jackson and located in the mail lobby, as well as products customised by the architect Carlo Rampazzi. Giorgetti also leaves its elegant mark on the hotel, furnishing several suites: design pieces in dark wood, such as the Myo stand, mingle with ad-hoc creations including the Ino double bar, Norma bed, Leo table, Moon armchair and Astor sofa, which takes pride of place in the rooms’ living areas. Poltrona Frau was tasked with decking the hotel lounges out with the warm, material vibe of its upholstered furniture. Meanwhile, the classic candour of the Provasi style can be detected in the suites, where the flexible design ethos of the brand shines through in the creation of bespoke beds, television stands, curtains and wall fabrics. The exquisite creativity of the Visionnaire brand finds the perfect platform in the complete design of two suites, while it is also the brains behind the sixth-floor Cafè Cardinal restaurant dining hall and the bar lounge area situated on the last two floors. Last but not least, The outdoor is furnished with Canasta and Canasta ’13 Collection designed by Patricia Urquiola for B&B Italia.

An oasis of wellness

The global design of W Dubai